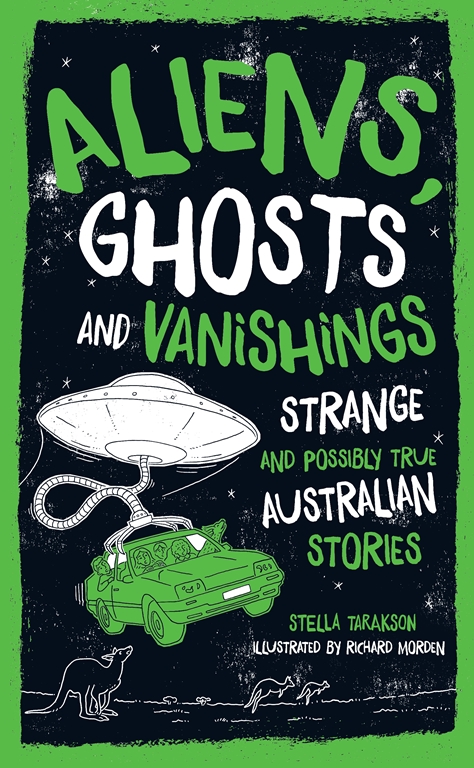 Green can be an unsettling colour, but Richard Morden has used it to great effect in his minimalist lino cut illustrations that accompany Stella Tarakson’s wonderful collection of strange tales, urban legends and unnerving encounters of the extra terrestrial kind. Divided into themes: Mythical Creatures, Mysterious Locations, Haunted Places, UFO Sightings, Bizarre Disappearances and Strange Happenings, Tarakson explores the theories and myth that lie behind some of Australia’s most unique and unexplained stories.

What really happened to the ‘unsinkable’ SS Waratah in July 1909 after it set sail for England and vanished without a trace? Was its name really cursed? And what has the legend of The Flying Dutchman got to do with it? Perhaps you’ve heard of spontaneous human combustion (SHC) but is it really possible for the human body to suddenly burst into flames for no apparent reason? There have been many accounts of this phenomenon not only in Australia but worldwide and many intriguing theories too. And what of the bunyip, is it real after all? And have you ever heard of the Hawkesbury River monster? Perhaps you should have a read and find out.

Well researched and presented, Tarakson makes good use of subheadings to segment information and provides multiple opinions, theories and, where possible, scientific evidence. She does not however draw her own conclusions, but rather encourages her reader to do that for themselves. For those who are keen to investigate further, websites and references are provided in the section ‘Want more’ at the end of each theme with a ‘Want even more?’ at the end of the book.

Author of more than 30 non-fiction books, largely for young people, Tarakson’s latest collection will appeal to a male and female readership 10 – 15 years although its intriguing tales and illustrations will cross the age divide. A terrific addition to the home or school library.  Highly recommended.