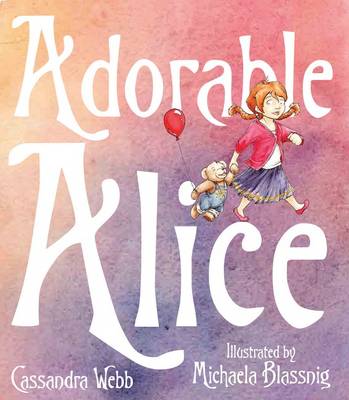 After reading this story about Alice, the adjective ‘adorable’ is probably rather tongue-in-cheek.  Alice is a rather trying young lady who likes ‘to do something different every day’.  Examples include not talking to anyone all one day and wearing a thick beanie so she can’t hear anyone.  But the most demanding day is the one when she puts on a blindfold and tries to negotiate her way around the house by smell and touch, with somewhat disastrous consequences.  However the denouement involves Alice being a little less than diplomatic with her Grandpa.

The large full-colour illustrations each take up a double-page spread.  Although the people and pets are shown with their mouths open in many of these pictures, none of them appears to have any teeth.  Alice’s teddy is also shown as a character which walks and plays with her.  The font used for the text looks as if it is handwritten with the nib of a pen, as each letter has two fine lines in its shape.  Alice is a strong-willed character and it is up to the reader to decide if she is being just a bit rude to her poor Grandpa.