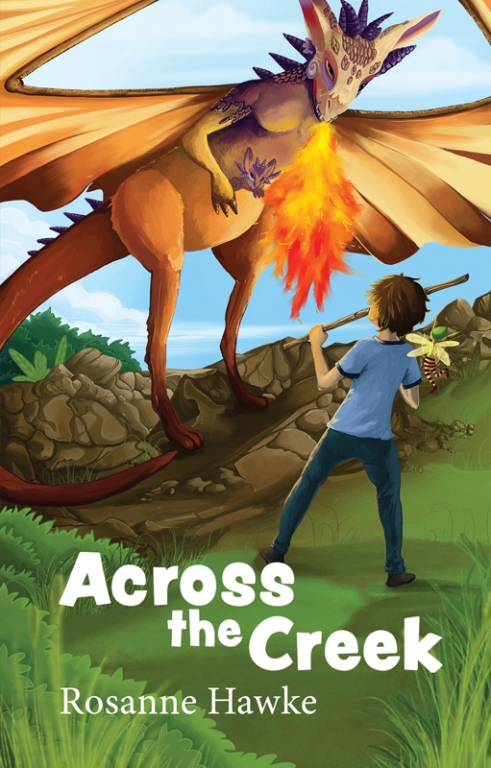 Based on Cornish folklore, Across the Creek is a fantasy set in an old Kapunda copper mine in the Flinders Ranges, South Australia. Originally published in 2004 for 9-12 year old readers by Lothian Books, this new publication from Stone Table Books comes with a new visual interpretation of the Dragaroo by Kylie Leanne and internal illustrations by the ever talented Marc McBride of Deltora Quest fame.

11 year old Aidan Curnow has grown especially troubled on the 12 month anniversary of the disappearance of his friend. Jenice Trengove’s mysterious disappearance has never been resolved and Aiden finds himself drawn across the forbidden creek into Trevalia with a desire to bring Jenice home… but it won’t be easy as he has to conquer numerous obstacles and challenges before Jenice’s ‘year and a day’ are up.

With the help of a mischievous, Cornish fairy, known as a piskey, The Lady of Trevalia sends Aidan on a strange journey to save a group of children from the spriggans. The children, who are from various times in Australia’s history, have become trapped in Trevalia. The scant introductions and lack of development of these characters was disappointing as the story may have benefited from a deeper dip into the historical background of each of these children.

I enjoyed meeting the various mythical creatures that came to Australia with the first Cornish miners over 160 years ago, but felt that these creatures could have been given more substance in the story. And, unfortunately, the descriptions of the Trebiggan were contradictory… described as a mermaid-like creature with a tail like a whale, a tail like a shark and a tail like that in Marc McBride’s illustrations.

Kids of today will laugh along with Josh when Aidan tries to talk to him about his first venture across the creek and his encounter with Raff the ‘piss-key’. The news reports are also nice touches for the reader, providing an interesting conclusion to Aidan’s and Jenice’s return from the community’s viewpoint.

Although a winner of Holyer an Gof Children’s Book Award in 2005,  an award established to raise the standard and profile of books about Cornwall, I am sadly disappointed in this book. I found it very difficult to immerse myself in the story, as I was confused throughout, having to backtrack, like Aidan, to figure out the relevance of each event.

Throughout the book, Aidan is full of questions… which is understandable, except his uncertainties might have been more powerful if shown, rather than told.

Roseanne Hawke states that ‘Across the Creek is a story exploring death. What are fairy stories anyway except ways of explaining the unexplainable to ordinary people?’ It is true that this is a fantasy story, but I wasn’t sure how it would help children understand the mystery of death.

Teachers’ notes can be found on the author’s website.