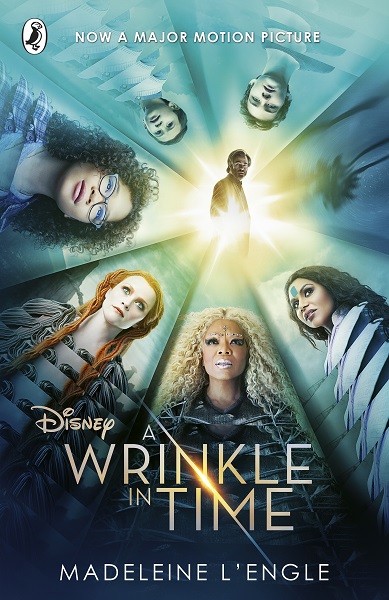 A Wrinkle in Time is the book that has started many readers on the path the fantasy and science fiction. When I read it at around the age of 11, it had a profound impact on me. I’ve re-read it many times since then, and studied it even, and it still holds a special place in my world. I am nervous about the release of the new movie based on this book, because how could any movie possibly do justice to the vision of this book in my imagination? But I sincerely hope that the movie will lead a whole new generation of readers to discover and love A Wrinkle in Time.

Meg Murry was a character that I identified with. She is a girl too bright for her own good, uncomfortable in her own skin and struggling to grow into herself, and unlike her brothers, Sandy and Denys, she hasn’t mastered the art of blending in at school. She’s picked on by the other kids because they don’t understand her, and the teachers and adults around her aren’t sure whether she’s brilliant or backwards.

Her parents are both brilliant scientists, and adding to Meg’s misery is the fact that her father has gone missing. The town gossip is that Mr Murry has left his family, but Meg just knows there’s something else going on.

Then, one stormy night, Meg meets three strange women – Mrs Whatsit, Mrs Who and Mrs Which – and she and her little brother, Charles Wallace, and another town misfit, Calvin, are sent off through space and time to find Mr Murry and save him from evil.

The cast of characters is quirky and strange, and sometimes chilling.  The planet of Camazotz, ruled by the evil IT, is a fascinating study of the dark side of conformity. Alien beings, both loving and cruel, are met, and weird planets are described in beautiful, evocative detail.

Underlying the deceptively simple and engaging story of a young girl trying to rescue her father is layer on layer of deeper meaning. The story is grounded in an interest in science.  Meg’s whole family is driven by a fascination with understanding the way things work, but Mr Murry’s scientific research into tesseracts (the wrinkle in time of the book’s title) has taken him into the unknown. The point is made that there is more to the universe than can ever be understood, even by minds as brilliant as the Murrys’. In this book, alongside the great mysteries of the physical universe lie the greater mysteries of the heart and spirit.

The broader themes of A Wrinkle in Time embrace the constant fight to stop evil from prevailing, and the sacrifices, great and small, that are made in that fight. L’Engle effortlessly takes one girl’s struggle and resolution, and places Meg’s story in the context of a wider human – and beyond human – struggle. I love the moment when the three children are asked to reflect on the people of their planet who have stood against the darkness, and they name great thinkers and activists, mathematicians and scientists and artists, who have been sparks of light throughout our history, and it is, now and always, worth reflecting on those light-bringers as we try to strike our own sparks in the darkness.

The character of Mrs Who brings in another link from the personal story to the greater arc. She speaks in quotes taken from Shakespeare, Dante, the Bible and the Greek philosophers, and while this looks on the surface like a funny failure on her part to understand how humans communicate, it also ties what is happening in Meg’s adventure to the vast accumulated human experience in literature, religion and philosophy.

Fundamentally, though, A Wrinkle in Time is about Meg’s journey into maturity, from the first, innocent hints of romantic love, to the acceptance of a dawning maturity. The turning point comes when she realises that although she has saved her father, he cannot fix things for her. It is her turn to step up and grow up, and L’Engle’s depiction of that moment for Meg is profound. As a parent, I was also struck anew by the poignancy of Mr Murry’s dilemma in that moment. As a parent, you want to protect your child and fix their problems, but there comes a time when you have to step back and accept that it is for them to take the risks of life, and the growth that comes with that risk.

The film edition of this book also includes a foreword by the director of the new movie, and an afterword by the author’s granddaughter, as well as an interview with Madeleine L’Engle. I appreciated the additional insights in these notes, and would recommend getting your hands on this edition just for those extras.

Madeleine L’Engle was inspired to write A Wrinkle in Time after reading Einstein and other physicists. A Wrinkle in Time is a meeting place between science, philosophy and humanity, which becomes far more than the sum of its parts. But these grand themes and deep ideas still hold up because we can believe in Meg – bright, angry, loving Meg – and want to follow her journey through space and time.