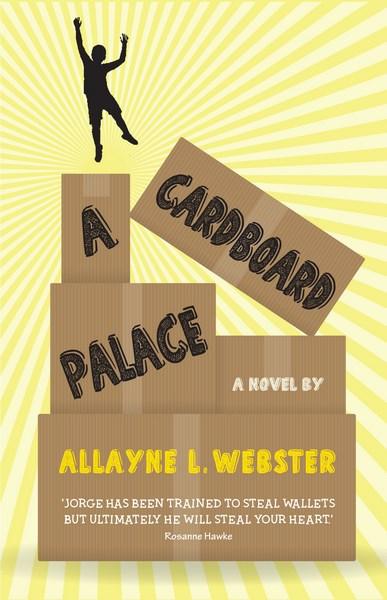 Some characters stay with you long after a book is finished. They leap off the page and become so real you wish you could enter their world and join their story: in this case, to help them escape their terrible reality. Jorge, the central character of A Cardboard Palace, is one of ten kids who work for Bill, a modern day Fagin running numerous scams around Paris. Jorge begins the book simply doing his best to survive an incredibly difficult and dangerous life. He calls Bill his controller, and the opening scene of the story shows Bill doing exactly that – telling Jorge the precise moment to step in and rob an old man who is taking money out of an ATM. But over the course of the story Jorge’s strength and integrity shines through, despite the life he has been forced to lead, and he finds a way to escape to a new life whilst also changing things for the better for those around him.

A Cardboard Palace is an unflinching look at the reality of life for children who are trafficked to Paris from distant European villages in order to work for criminals who train them in how to thieve and beg. It deals with tough issues such as hunger, poverty, child marriage, serious illness and exploitation. Yet it is written with enormous empathy, allowing the reader real insight into why Jorge and his friends are stuck in their criminal world, regardless of their own wishes or dreams. The children live in a refugee community that is under threat of being bulldozed because of politics. Jorge unwittingly finds himself being the voice of the community when he is filmed making a simple statement about the threat to their home, and this incident has a knock on effect that changes everything.

This is an important book for upper primary readers as it will allow them to understand that not all children live fortunate lives. With an extremely engaging central character and a gripping story it will quickly draw readers in, but it is strongly recommended that it be read with adult guidance and discussion of the issues it brings to light. This is particularly true of the disappearance of Kali, a small child who is very ill – taken away from the camp by Bill, she is never seen again and Jorge suspects something terrible has happened to her.

Ultimately this beautifully written book offers a great deal of hope – Jorge finds support and help, which enables him to begin a new life where he can be in charge of his own destiny. Highly Recommended for mature readers.

Teaching Notes can be found on the author’s website.