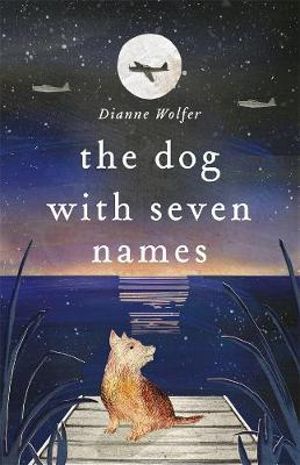 The adventures of a loved animal through difficult times, threaded through the fortunes of a succession of human “owners” is a classic trope in literature. As far back as 1877, Black Beauty by Anna Sewell used the familiar plot to create sympathy for ill-treated animals. Her novel is narrated by a horse who passes through the hands of a series of owners, some cruel, some kind.

Another famous book is Lassie Come-Home (by Eric Knight, 1940) where a rough collie dog must find her own way back to her beloved owner. Animal protagonists are alive and well today in children’s literature and even in fiction for adults (e.g. The Travelling Cat Chronicles by Hiro Arikara, Penguin, 2017). In less than expert hands, there is a danger that anthropomorphism can become twee and predictable. I began reading The Dog with Seven Names cautiously, hoping it would not fall into this trap. I need not have worried.

What Dianne Wolfer has done in this new book, with aplomb and sensitivity, is to set the story of a loved dog against the little-known details of events in the Second World War in Western Australia.

The likeable first-person narrator of the story is a small dog of mixed parentage. “Princess” had an Australian terrier mother and a dingo father. On page five, she reflects: ”Elsie said the colour comes from my dingo father and that golden eyes meant I’d be clever and able to see things differently.” This is a clever way of highlighting the Australian flavour of the story and offers indigenous children an additional opportunity for empathy with the character.

Unlike Lassie, Princess is handed from one owner to another, and humans play the major role in securing a reunion with her first and most beloved owner, Elsie. Only in one episode is Princess/Flynn alone in a dangerous landscape, threatened by violence and catastrophe. Help comes in the form of a benevolent human. Although scared and disabled, Princess survives the war. Many of the human characters do not.

The little dog plays a loyal, loving role to all the human characters. Like a therapy dog, she soothes patients in the hospital by her presence, and supports children in their endurance of pain.

In ten chapters and an afterward, we track Princess over twelve years, from runt of the litter to old age. A helpful timeline and glossary provide extra information about the war and the historical era of the story. A moving and educative book. Highly recommended.