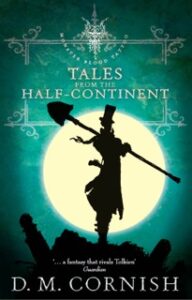 Set in the world of The Monster Blood Tattoo, this engaging book encompasses two ‘novellas’ or long short-stories.  These stories are set in some indeterminate past era, very Dickensian in style and tone and peopled by a host of strong, eccentric and memorable characters, where brave young heroes/heroines battle rascals, thieves and monsters.  The language is often archaic, incorporating some arcane or invented words and featuring extraordinary people working in obsolete occupations, with weird, often-hilarious names with peculiar spelling.  The complex stories are enlivened by occasional wonderfully evocative, bold black and white portraits of key characters.

The Corser’s Hinge (130pp) is an exciting adventure wherein detective Atticus Wells sets out to locate abducted Viola, the rebellious daughter of a wealthy family.  Assisted by his silent henchman Door, young friend Petulicus Sprawl and warrior twin sisters wearing bird masks they follow the trail through city slums out to the backwoods which are inhabited by a dangerous lunatic sect of false-god worshipers who have summoned up the fearsome sea-monster Shilemoth.  Thereafter follows a violent running-battle and a wild escape with a strange and unexpected rescuer who finds himself facing his own moral dilemma between making a handsome profit or abiding by his code of honour – the Corser’s Hinge.  The reader is left gasping and wondering!

The Fuller and the Bogle (85pp) In Cestus ‘Scour’ Frangible is a chemical-wielding monster-slayer (a ‘scourge tetratologist’) who had a long-term partnership with monster-hunter Bland, but all Hunter Bland’s tools of the trade were sold after his death, except for a precious Olfactologue (a box-like face mask which condenses smells) kept safe by his daughter Virtue.  Virtue gets a job working for decrepit old Frangible as a washerwoman (‘fuller’) and one day narrowly avoids being killed by a Bogle (ancient monsters presumably unable to enter the city walls).  Feeling guilty that another fuller was killed instead of her, Virtue determines to capture the Bogle using her olfactologue to track his smell.  After a desperate fight when Virtue and the Bogle are both wounded, she finds herself pursued by both the Bogle and by thief-takers, who accuse her of committing multiple murders.  How can she escape justice?

This extraordinarily richly complex companion piece to Monster Blood Tattoo is highly recommended for lovers of Dickensian or steam-punk worlds and for its thrilling escapes, monsters, eccentric characters and engaging, playful use of language.  Fabulous stuff!