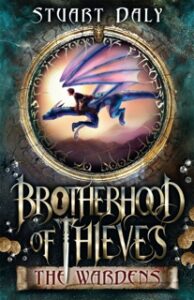 With an eye on the map of Britain including a few place names, all suitably and subtly changed, Stuart Daly has created a new sword and sorcery adventure tale.

Caspan, a young thief, along with four other teenagers is chosen to join the Brotherhood.  They are to be responsible for seeking out magical items from the tombs of kings from a long dead race.  While their training is much fun, especially in the company of their new pet guardians, mythical creatures from another plane, they soon find themselves confronting and fighting a race of giants.

Daly is able to not only use his historical skills, but also his understanding of what makes young teenagers tick.  The humour is robust and at times touches on the scatological but at the same time the pace is fast and the emotions are warm but never condescending.  This story is going to appeal, firstly to young high school and upper primary school students, but also older readers who enjoy fantasy, all who will want to read more of Caspan and his companions.