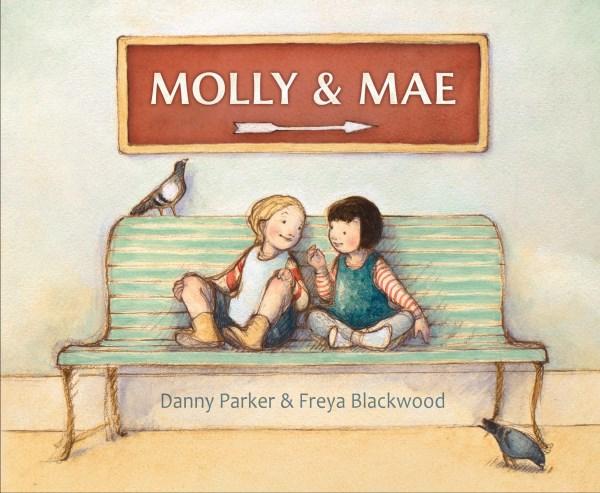 This could simply be a story of the train journey of two girls and their mother through the Australian countryside. It begins at a country train station where they play hide and seek, get stuck with bubblegum and do various other activities. Their playfulness continues when they are on the train until they have a disagreement and spend some time apart. It is a long journey when you miss your companion. They come to a bridge on their train journey and in their relationship, one built of kind words, words that should be said. Beautiful double page vistas show the journey through the countryside until the train reaches its destination.

Yes, this could be a simply told story, however, the collaboration of the visual and verbal texts in this picture book makes it far more complex than the above synopsis. This book is something very special.

The verbal and visual texts work together tremendously. The verbal text is sparse and overflows into the visual several times, such as in the platform signs. In fact, the publisher’s name is on the platform sign on the inside cover page, giving a self-referential aspect. The signs throughout the book act as sub-headings for the plot of the story and stops taken by the train. All illustrations are double page spreads. Some, such as the landscapes, take the entire spread with illustrations to the edge of the page, some are of the carriage or station with smaller illustrations of the two girls placed vignette style from left to right.

Many aspects not mentioned in the verbal text occur in the visual text, and there are many instances where the visual text confirms, or provides a location or context, for the verbal text. Freya Blackwood has used a variety of angles and picture book codes to tell the story. We see many front angles, some spreads using the inside of the train carriage or the train itself as a framing technique, always directing the reader to the right hand page and beyond. This self-referential technique enables the reader to feel as they are travelling through the book as the characters are travelling on their train. The long shots of the train as it moves through the countryside are exceptional, telling and giving much more than any verbal text could. Suitably, the verbal text is limited in some of these instances, one double page spread has only five words but says so much. Blackwood’s typical style can be seen in her use of shape and colour, always influencing the mood of the narrative. She used oil paints and laser print on watercolour paper.

The end papers are part of the visual narrative and, like the entire book, are double spreads. The front end paper is a country landscape while the back end paper shows a city landscape.

Danny Parker and Freya Blackwood have again teamed up to produce another exquisite picture book. Highly recommended for all.