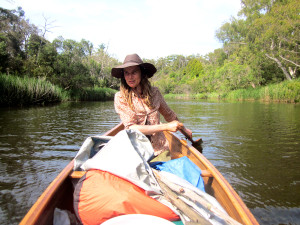 Trace Balla’s second book Rockhopping, detailing Clancy’s further adventures in the outdoors with Uncle Egg has just been released. We were given the opportunity to put some questions to Trace, and the Q and A is posted below. Rockhopping is published by Allen & Unwin and was released on April 1, 2016.

Why do you think it’s important for young people to have a stronger sense of their natural environment?

I think particularly kids in the city are losing their connection to the environment. A lifestyle where for example car travel, screens and air conditioning are normal parts of life, removes us from nature. But if we choose to walk somewhere instead of drive, we notice so much more, and the more we connect, the more we care about it, and about ourselves as we are part of it. For example, when you ask about what’s the landscape like by the sea, someone may talk about the waves, the sand, certain fish or birds. Often people forget that we are animals and are a part of our landscape too. Us humans have such a massive impact on the health of the landscape.  The natural environment is so damaged, that to marvel at and treasure what we do have gives us reason to protect and nourish our planet. 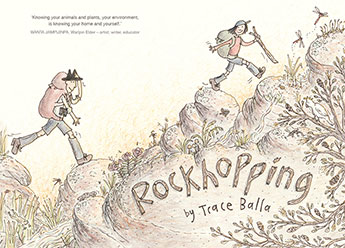 How do you plan out the books? Is there a lot of pre-plotting?

It depends a lot on the book. With Rivertime the book comes primarily from my journals created whilst I spent ten days paddling on that river. Then I made notes and twisted my experiences and findings into a story. With Rockhopping I went intentionally on a trip to find the source of the river to make a story. However things happened on that trip that I didn’t expect and so a sort of story unfolded along the way. Again back home I twisted my experiences and research and ideas into a story. I took ideas from several trips to Gariwerd (the Grampians), from ecologists, rangers, indigenous people who had suggestions of what may work in the books, and from other experiences I had. With Shine, I wrote the original story in the middle of the night and did the original illustrations within a week. This was a story written specifically for my Niece and Nephew in response to the sudden death of their father. The book I am currently working on is based on dinner conversations I had with my son. I have also been taking notes for about 5 years for another book. I just keep collecting ideas for this story, like a slow brewing soup, adding a bit of this and that and trusting that one day it will be cooked… The notes for all of these books are sketches and words.

Which aspect do you enjoy more: the writing or the illustrating? 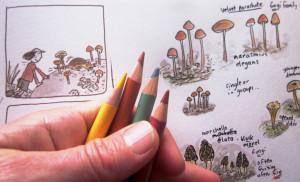 I love those magical little idea moments that come now and then, and I love those days where I’m drawing and listening to the birds out in the bush and in the studio the most. I don’t really separate the words and images so much, so really I like both!

Which is more time consuming: The practical research or the ‘bookish’ research?

mmm… the ecology research took ages, partly because I was so intrigued and kept getting interested in things that I couldn’t even put in the book. Working with quite a few indigenous groups took up quite a bit of time. It was important to do that properly and go through the processes as it’s something I feel very strongly about. Editing, sending versions back and forth takes time too. It’s all such a big adventure and I do tend to lose track of time. Rivertime and Rockhopping both took around two years to create.

Your books are being highly regarded both by critics and educators. What value does winning awards bring to you?  Or is it more valuable to know teachers are using your books in their classrooms?

Winning an award or gaining recognition is a bit like getting a pat on the back to keep going, your doing well, which is great when you mostly work alone at home, but mostly I think it’s great as it means the book gets more exposure and then into schools more and then this passes on my messages more. So really it is a small victory for the birds, the trees and all that other amazing life on this planet, as anything to get people to marvel and care more is a great thing. I feel so glad to have some positive impact or effect in awareness raising. It also bring responsibility. After the success of Rivertime, I am aware that a lot of people may “read” Rockhopping, so I was careful to think about what I wanted to “say” to those kids. Milipiri Elder Wanta Jampijimpa has given me encouragement to keep doing these stories, that he says are about ‘reading country” and giving hope. Renowned environmental educator David Suzuki has also given me encouragement about my books inspiring kids to be in nature. These two elders encouragement points to passing on wisdom that we often lose sight of in our modern, often urban culture.

What’s up next for you?

I am currently working on at least three books: The first is well underway and is about local food and community. It’s based on dinner conversations I had with my son about 12 years ago, and a story I first made then.

And will we see more adventures for Uncle Egg and Clancy?

I took a lot of notes during an adventure last summer about a potential story for Uncle Egg and Clancy. I am still undecided about running with that one… but I do miss being with the fellas, so we shall see!

Thank you Trace Balla for your generous time and thoughtfulness in answering our questions.