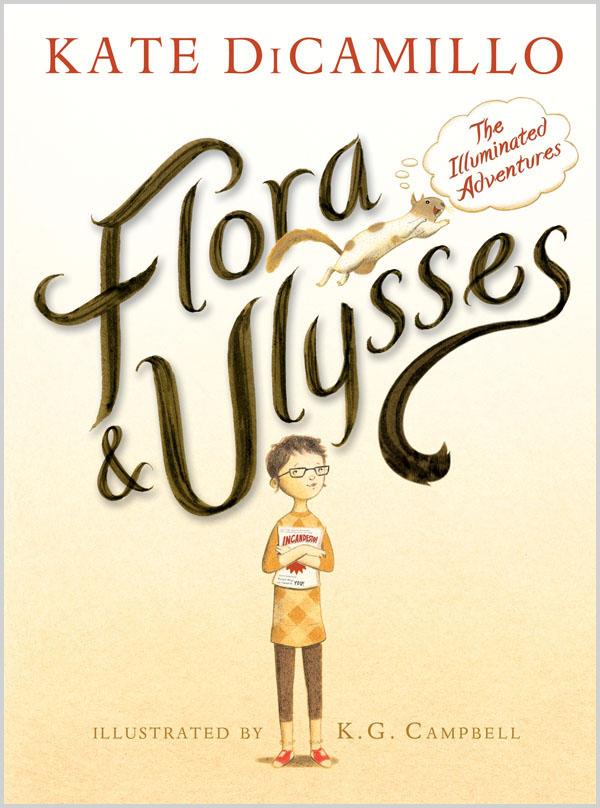 ‘Illuminated’ occurs in the title because of the mostly grey, wonderful cartoon-like illustrations, that are integral to, rather than simply extending, the text.  In the very best sense they light up the words on the page to become commentaries on the story line.  These eye-arresting and comic images are quietly satiric, mostly a wry, commentary on the text, so they add to the sophistication of the book itself.  Subtle verbal asides occur frequently; and are part of the fabric of this marvellously conceived commentary on human nature and today’s middle-class culture.  Yes, Flora is a girl: actually Flora Belle Buckman, given to comic books entitled The Illuminated Adventures of the Amazing Incandesto!, to which Flora makes reference when appropriate.  Her mother is divorced and writes romance novels; and Flora hates romance.  Indeed as her mother asserts she is ‘a natural born cynic who lived in defiance of contracts’, which sums up Flora precisely.

Ulysses is a squirrel, so named in that he was sucked up by a Ulysses 2000X vacuum cleaner owned by Mrs. Tickham, Flora’s next-door neighbour.  Flora who observes the incident from her upstairs room runs to pull the somewhat denuded beast out of the cleaner, thinking, “For a cynic I am a surprisingly helpful person”.  As such, Flora performs CPR on the squirrel; a technique learned from her readings of the Amazing Incandesto!  The semi-bald squirrel, who extricated from the mighty vacuum cleaner and survives, is obviously a superhero.  The subsequent chapters follow the highly entertaining adventures of Flora and Ulysses.  The disfigured squirrel begins to feel spectacular; strong, smart and capable.  So capable that he types out poetic messages on Flora’s mother’s typewriter.  Thus there is communication as well as affection between squirrel and human, despite the mishaps that quickly follow.

DiCamillo has a fertile imagination, along with a keenly perceptive take on today’s domestic comedies.  From her reading of comics Flora knows that ‘terrible things can happen to you’, but she also knows that a superhero, like a squirrel who survives being vacuumed up, has special powers ‘to fight the forces of darkness and evil’.  Moreover, from Incandesto!  Flora has a keen eye for characters like Alfred T Slipper who has a parakeet called Dolores whose expletives are used even by Flora’s father when ‘something truly unexpected and unbelievable was happening, which was basically all the time.’

The cast of characters includes, too, a boy, William Spiver, nephew to the indomitable Great-Aunt Tootie, who is ‘temporarily blind’, induced, perhaps, by trauma or extended hallucinations.  With such a plethora of abstractions this intriguing book has much in common with the theatre of the absurd.  Yet, because of the wit and eloquence of the writing, the way-out characters and the whimsical plot that is never slapstick, the absurdities within the book become endearingly droll.  There is an affectionate elegance about this fantasy that puts it in a class of its own.  It is a book to grow into.  Over time Flora and Ulysses is a book that deserves to be pored over and ‘loved to death’.