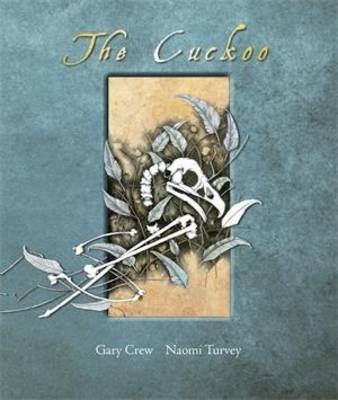 Martin is the runt of the family.  Abandoned by his mother and ridiculed by his cruel father and brothers, he seeks solace in the forest and dreams of flying free like the eagles.  When his vain brothers become prey to those same eagles Martin witnesses his father’s anguish.  Blaming himself, he returns to the forest intent on taking his life but comes across a pile of bones and feathers, the carcass of an eaglet.  Martin feels akin with the dead bird and vows to take its place, donning its feathers and climbing to the eyrie.  Just like a cuckoo chick he usurps the nest, growing strong and sleek.  Eventually, reborn as a mighty eagle, he flies off from the nest and spies his lonely and remorseful father on a cliff below.  Swooping down, he saves his father from death and soars towards the distant sun.

There is much to discover in this intriguing, multi-layered text.  The story is prefaced by a piece from a French fairytale referencing ‘Le Petit Poucet’ or ‘Hop-o’-My-Thumb’, a character small in size, but big in wisdom who outsmarts an ogre to save his brothers’ lives.  Crew’s tale is written in the style of a traditional folktale or fable.  Just as these tales often dealt with harsh realities in life such as injustice and death, The Cuckoo is quite confronting.  Martin is an abandoned, abused child who witnesses his brothers being torn limb from limb.  He accepts the ‘sacrifice’ made by his forest friends, eating them to grow strong.  Paralleling ‘Le Petit Poucet’, Martin, also the runt, uses his ingenuity to prevail against the powerful and ultimately rescues his father.

Another motif in this story is the cuckoo.  A bird with which Martin feels empathy, the clever cuckoo is actually a selfish bird who lays its egg in another bird’s nest, leaving its much larger offspring to be reared by foster parents whose own chicks (now runts in comparison) starve.  Martin is the cuckoo in the eagle’s nest.  Flight represents freedom and is used to foreshadow Martin’s future.  His brothers scoff at Martin, ‘Time you grew proper feathers and flew.’ Martin wonders, ‘What will I become?  When will I fly?’ Another story which comes to mind here is that of Icarus, who in order to be rescued wears wings created by his father from feathers and wax.  Soaring too close to the sun, Icarus plummets to his death.  Similarly, Martin applies feathers to his body and upon rescuing his father; his final act is to fly off towards the sun.  Could this be foreshadowing an ‘other’ not so happy ending?

Great stories evoke an emotional response from the reader.  This story is certainly evocative, even provocative.  Should the reader feel compassion for the abandoned, bullied boy?  Admiration for his resilience, ingenuity, forgiving nature?  Or is there a level of shock and disgust?  Was Martin justified in what he did to the forest animals and the eaglets?  From the beginning, The Cuckoo had me questioning.  It is set in Megalong Valley, a real place, and it seems to be present time but is written in the style of a timeless tale.  The haunting illustrations are skilfully rendered in pen and ink with pastel watercolour washes.  At first glance the drawings seem to be a naturalistic style yet are quite surreal, depicting mysterious eyes peeping, strange morph-like creatures and fanciful elements.  Martin’s cubby house is a nest-like retreat made of tightly bound leaves (much like a green ant nest) in a tree entwined with cotton.  These motifs are repeated- the eagles’ nest sits upon a similar tree and the eagles’ prey is delivered in a woven basket of leaves (creatures’ eyes peek out from among the leaves).  Martin first peers from behind the cubby door and then again from behind his feathers, which reflect the shape of the nest.  Once he emerges as a man/eagle, he turns his back on the viewer.  Reinforcing the motif of the cuckoo in the written text, its image appears often throughout.  This thought-provoking book demands multiple readings.  Highly recommended for middle primary aged children and above.