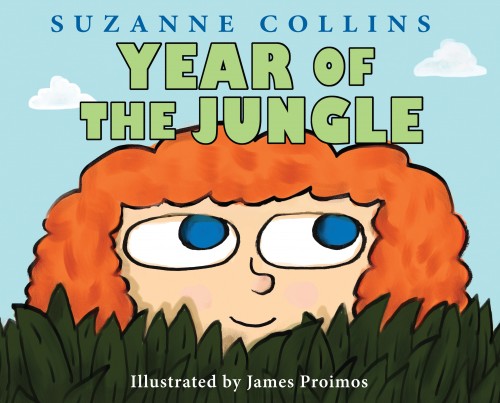 This is a picture-book memoir about what life is like for a little girl whose father has left to fight in the Vietnam war.  Suzy finds the situation bewildering; she wonders how long a year is, if her mother will go to the jungle too, why she gets too much Halloween candy from a worried lady, why her father sent her birthday card when it was her sister’s birthday – she begins to learn that the place her father has gone to is a frightening, confusing place.

Suzy’s dad does return: tired, thin and with skin the colour of pancake syrup, which I presume is because of hepatitis, and he often stares into space.  Suzy thinks it is because his mind is back in the jungle, but she accepts the changes, saying ‘Some things have changed but some things will always be the same.’

Suzanne Collins, author of The Hunger Games, own father went to Vietnam the year she turned 6 and she has captured the child’s feelings and viewpoints on grown up behaviours extremely well.  James Proimos’s sketches of a little girl with big eyes looking around her imperfect world are lovely.  The book is aimed at readers 4 and up.  KG