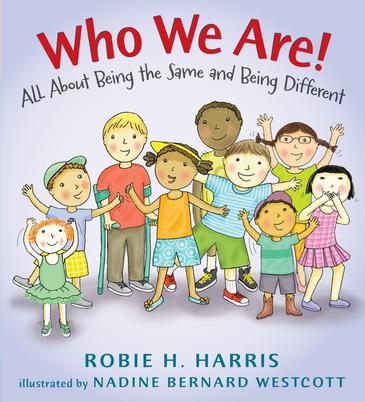 It is hard to tell if this book about self-awareness is for children or their teachers and parents; it is very didactic and repetitive. It reads not like a character-driven story as the pictures suggest but like a verbatim teachers’ manual for a human relationships lesson. The book runs two texts: a primary didactic exposition in dense blocks and speech bubble reiterations in the illustration. It fairly hammers home through repetition the fact that, in spite of general similarities, every one of the ‘billions of people’ around the world is different. Physical characteristics are evident at first as the young subject family enters the crowded grounds of the popular Funland theme park, then the text gets tediously caught up in explaining the role of melanin in skin and hair colour, touches on heredity and feelings, then delves into cultural factors that make people different from one another with a passing mention of colour prejudiced racism. The family has a big day at Funland, young Nellie and her brother ever wide-eyed at their discovery of differences within the diverse throng of park visitors. As the family leaves at the end of the day the two youngsters exclaim the book’s message: ‘I am me. And you are you. And that’s who we are!’ Lesson learned. In the hands of a little child however, there is much potential interest in all the activity in the crowded park scenes for them to imagine their own enjoyable narratives.