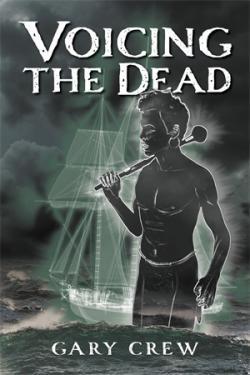 Voicing the Dead tells the true story of Jack Ireland, a 19th century English teenager, who was a crew boy on the ship the Charles Eaton which was wrecked at sea.  Jack was able to escape the sinking ship on a raft, but only reached land to see nearly all his fellow passengers from the raft killed by head hunters. He was finally sold to, then raised by, kindly Torres Strait Islanders on Mer (Murray Island).

This should have been a very exciting book. However, the plot which seemed to hold great promise,  did not seem to develop in a gripping, page-turning manner through the course of the novel.

I found Voicing the Dead difficult to follow at times. Jack moves back and forth in his memories referring to his time at sea, other ship wrecks and other people’s perceptions of his experiences. The wording is also rather florid, for example:

‘I am the first to admit, Dear Reader, that though inky blood continues to enliven the narrative of my life, I am at odds to ascertain the origins of my Lit Trips.’

The main action does not take place until a third way through the book although Jack explains that is because he wants the reader to understand his character first and because he is ‘loath to revisit certain traumatising events.’ When the murders do take place, they are written in such a terrifying, disturbing style that you can see the character’s point.

Voicing the Dead is suitable for young people aged 17 and over. Dr Gary Crew teaches creative writing and has won several awards for his writing.  Teachers’ Notes can be found on the Ford Street Publishing website.