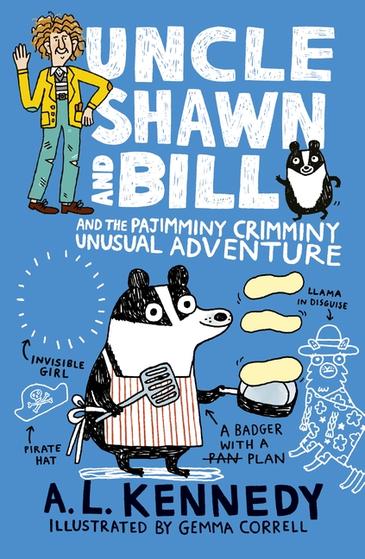 What a cast of characters! There’s Uncle Shawn and his best friend Bill (the Badger), some crazy llamas, an invisible girl, a pirate boy and some spiders. There’s also evil Dr P’Klawz, who wants to squish all Unusualness out of the world.

Unfortunately, Dr P’Klawz has his eyes set on Uncle Shawn, who he decides is not only Unusual, but Pajimminy-Crimminy Unusual. When Dr P’Klawz arrests Uncle Shawn and carts him away to the Institution for Maximum Security and Unusualness-Curing, the other residents of Pandrumdroochit are becoming increasingly suspicious of Unusualness and worried that they’ll be taken away next. But Bill plucks up his courage and becomes a badger with a plan. With the help of the llamas – Brian, Guinevere and Ginalolobrigida – and the other friends, Bill sets off to rescue Uncle Shawn and save him from being cured of his Unusualness.

It’s a simple and familiar formula – evil “doctor” puts himself in a place of power, spreads fear and suspicion and eventually the people rise up (or in this case, the badger and some Llamas). But in this book, it’s been done so creatively, and with so much humour and panache that it makes for a romping good read. The narrator is comforting and reassuring and the illustrations add to the hilarity right to the predictable but satisfying end.

I was somewhat reminded of Enid Blyton’s The Magic Faraway Tree –  a lengthy book with a cast of unique characters and talking animals in a fictional land. The language is, of course, more modern but I’m sure it will appeal to children who love that mixture of fantasy and humour. I thoroughly enjoyed this, I may have even laughed out loud.