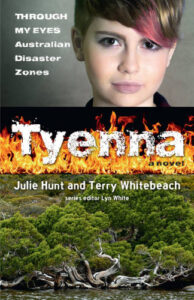 Tyenna (Tye to her friends) is thirteen, and excited to be going on holidays to her grandparents in central Tasmania’s Broadwater Lake area. It is 2019, the year of Tasmania’s terrifying summer bushfires. 2000 hectares were burnt in these fires, the most extensive blaze since 1967. The fires were caused by lightning strikes from storms that are a result of climate change.

For the first time, Tye will have her own small bungalow on Nan and Pop’s property. She is growing up fast and looking forward to adventures with her best friend Lily, and a long walk to the Walls of Jerusalem with her Pop. But none of this can happen because bush fires are coming fast upon them.

The novel’s exciting narrative revolves around a homeless boy trying to survive in the bush on the lake shore, and old Lance, who is fading as fast as Tye is maturing. When old Lance Armitage who lives with Nan and Pop wanders off at the height of danger, and the boy in the bush is close to being trapped, Tye goes to rescue both of them. But what can two children and a geriatric gent with a feeble mind do against a bushfire?

This is a gripping yarn, with lively characters, and lots of bright dialogue. As part of a series on natural disasters, the take-away message has to do with the dangers of a warming planet, effects upon children (Tye is smart and thoughtful throughout) when these avoidable disasters happen, the suffering of human communities, and of the creatures of the bush. Most sadly in an immediate way, many Tasmanian pencil pines some of which were over 2000 years old were burned out in the fires of 2018-19. They will not regenerate. As the climate crisis worsens, the question for writers and artists becomes the urgent one of what kind of artistic projects are needed or will be adequate.

This series is one way in which writers are bringing history, science, and human stories to the children who will be the next generation that’s needing desperately to be both well informed, and compassionate towards each other and the planet. Both the co-authors are survivors of bushfires, so they have knowledge as well as passion for bringing this experience alive to readers.