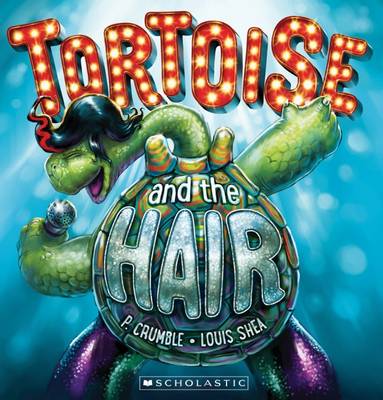 This is a charming reworking of the old Aesop Fable.  Whilst the original tale feature a footrace between an overly confidant hare and a determined but slow moving tortoise this book is a little different.  The tortoise is now a rock and roll carapace clad performer hoping to make it big on stage.  His secret weapon, or so he thinks, is a wig styled after Elvis himself.  The hopeful tortoise loses his wig just before the big competition and becomes sure he will be really bad without it.  His mate, the hare, promises to help him find his hair and the race is on.

The illustrations are cleverly drawn with lots of characterisation and detail which adds to the story.  Each of the animals is given its own colourful personality and the illustrator has had a lot of fun revealing their foibles.  Their interaction with the key headpiece is fun to look at whilst the story rolls along.  The text is written in a rhyming pattern which is fun to read and to read out loud.  This would be suitable for children of pre-school age and up.