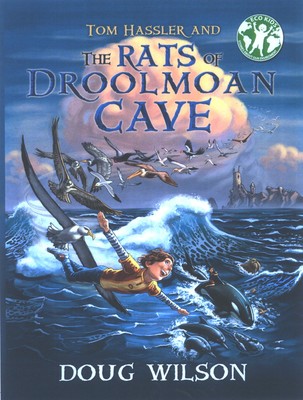 Book one of a series based on the adventures of one Thomas Hassler and marketed as an Eco-Kids book that tell stories about the environment, this is a fantasy where a willing suspension of disbelief is necessary.  Tom believes himself to be an ordinary boy living a boring life (with only his mother as family as his father was dead) until there is a calling.  To his delight (and occasionally horror), he discovers that he has special skills and knowledge: he belongs to the Sea People and indeed, as the story unfolds, can speak across species through the language of Seawish and can even fly!  The great challenge is that the Sea People are under threat from Madame Hortense (a fantasy creature from the dark side) who leads the Droolmoan Ratpack and other ghastly creatures and Tom is identified as the Sea People’s great Hope.  Madame Hortense has escaped her prison life and is set on destroying the world with her Ratpack.  Plans are made and all the creatures of the sea world unite as well as Tom and Marie, a daughter of one of Tom’s father’s friends, to do battle with evil.

This is a ripping yarn that could hook in the middle school reader, though the eco-message at the end is periphery to the substance of the plot.  The book would be a good place to begin the journey of exploring reader-positioning in literature (be it rat, snake, wolf or lion) and the consequential ecological implications.  Then the book would truly be an Eco-Kids book!  JMcK