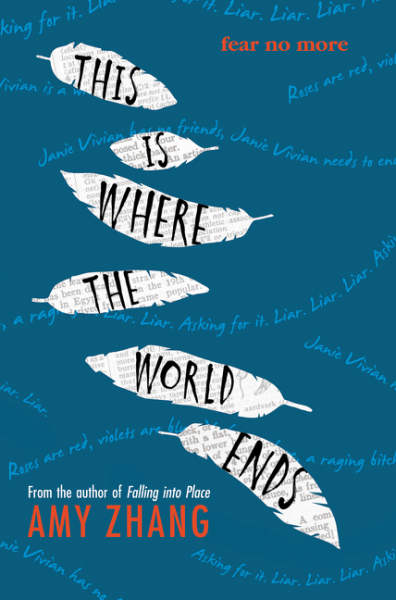 What an intriguing and moving book this is. Janie and Micah are best friends but no-one knows. They are almost each other’s alter ego. This is far from a linear narrative structure; it is quite complex moving backwards and forwards in time and between the first-person narrative of both Jane and Micah, interspersed with selections from Janie’s diary and her versions of well-known fairy tales.

Micah is deeply in love with Janie but is reluctant to tell Janie as she is the one who really wants their relationship to be kept quiet. Janie goes out with Ander, one of the most popular boys in the school.  Her real interest is art but she goes with Ander to inter-school wrestling matches because that’s what is expected of her as his girlfriend. Micah is very much interested in music and he and Janie also share that artistic, cultural link.

Micah is a kind boy and is always thinking of Janie’s welfare. But when disaster strikes, he is the one Janie’s father and the police think lit the fire that burns down Janie’s house. Micah’s father is rather distant and very little help when Micah needs support. The one who is the most help is Micah’s friend Dewey, who visits in hospital, who supports him through his phase of amnesia and depression and is the one who finally has the courage and concern to tell Micah the truth about what has happened to Janie.

At a party one night, Janie drinks too much and is raped by Ander. She tries to refuse but doesn’t have the strength; she tries, unsuccessfully, to appeal to a number of her friends to stay with her as she feels uneasy.  The reaction of their school peers to the rape is appalling and Janie is vilified in all sorts of ways.  A number of her friends simply take a prurient interest in her sexual exploit and won’t believe she was raped. Others  – and Ander’s friends – label her a slut and worse. It is this bullying which leads to Janie’s eventual suicide. Like Virginia Woolf, Janie fills her pockets with stones and walks into a lake to drown. On the rocks she has written all the names she has been called at school.

This scene, when it is revealed by Dewey to Micah, is heartbreaking.  As a reader, one also questions the way Janie has set this up, with the arson at her house and then the suicide. It is manipulative and cruel as it leaves Micah both bereft and under suspicion. It is clear from the way Janie is constructed throughout, however, that she is very manipulative; it is her idea to keep the relationship secret and we see that many of their activities are directed by her.

The importance of music and art is highlighted as Micah retreats into music after he is hospitalized. He cannot remember what happened and music provides some comfort.  Janie is constructing in the art room a large-scale angel with a wire frame and carefully-constructed paper wings. This angel signifies Janie’s state of mind, with progress in building it indicating her up-beat mood and its destruction emblematic of her depressive state of mind.

Memory is a significant element in the plot structure. Micah suffers from amnesia and the gradual return of memories is bittersweet for him. He remembers the happy times he and Janie had together but gradually comes to realise the reality of her absence. The memories which return them are painful but potentially cathartic as the ending of the book suggests that Micah might be able to move on from this point, particularly when he discovers, when visiting the lake where she has committed suicide, that Janie has rejected a very special gift he gave her. This signifies both her determination and a kind of betrayal of their relationship.

Landscape also plays a significant role on the book, acting as another marker of Janie’s feelings as well as being the scene of special times between her and Micah. It also provides the stones and water with which she commits her final act of destruction.

This is a sensitively-written book which might equally require sensitive use  as it includes, as discussed,  suicide, bullying, rape, excessive drinking and teenage mental illness. All of these are realities in the lives of some young people.
Reviewed by Margot Hillel