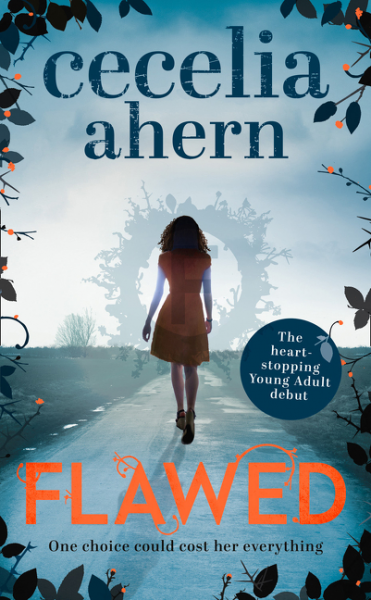 Celestine lives in a totalitarian society, not that she recognises it as such.  In her view, she lives an ideal life. She’s doing well at school, she has the perfect boyfriend and she has plenty of friends.  But in her culture, there is no room for anyone who breaks a rule as they can be deemed flawed. If they are labelled as such by a court, they are literally labelled, branded with a letter F to mark them out from those around them.  This is not the end of the punishment, however. The ‘Flawed’ must eat different foods, they are not allowed treats, their brand must be visible at all times. They are also assigned a Whistleblower to make sure they (and their families) conform with the strict rules by which they must live. Despite its apparent functionality, this is in fact a dystopian society.

As with other totalitarian societies, it is hard to know who to trust. Who is likely to betray you to the authorities? Who, amongst those who formerly counted as friends, will stand by you? Celestine must grapple with all these problems, in addition to coping with a Whistleblower who seems intent on finding some fault for which she can punish Celestine. The book encourages readers to reflect on the sort of cruelty that can arise and continue if power is unchecked.

Celestine is a strong female hero although often fearful and sometimes, particularly early on, even cowardly. Her instinct to carry out the action which leads to her conviction as Flawed, comes partly from her clear, logical brain and her appearance in court is courageous. We see her develop and change from someone who actively supports the concept of the definition of the Flawed and their treatment, to one who questions and challenges. The characterization is generally strong in this book and the diverse characters are convincing.

The book moves at a lively pace and there are moments of great suspense and real pathos. The scenes where Celestine is branded are strongly written and horrifying.  The gradual build up of increased levels of control against the ‘Flawed’ and the widening of reasons for which they can be punished are reminiscent of other totalitarian regimes such as Nazi Germany.  The horrifying impact on the Flawed person as well as all those around them, particularly family and friends, is well-drawn. The fear engendered by the rules when one is not necessarily even sure one is breaking them, is palpable. The relationships are convincing. Celestine’s family are depicted as supportive and accepting, although her younger brother is somewhat frightened of her, an indication that the propaganda about the dangers of the Flawed is successful. Her relationship with Ander deteriorates as he is unable to stand up to his father; teachers at school are afraid to teach her; her Whistleblower is depicted as a terrifying woman, whose zeal is prompted, in part, by revenge and best friends slip away.

The book also explores how quickly things can spiral out of control in such a regime. The chief judge, Celestine’s former boyfriend’s father, reveals his true colours as a kind of megalomaniac. Although he claims that all his actions are for the good of the country and its stability, his ranting outburst in the branding chamber shows that it is really all about his power. Even those who work in the branding chamber and carry out the orders of the court are shocked and questioning of his actions when he seems to be taking revenge rather than carrying out a legitimate (by the standards set in that society) sentence. Such actions lead to the first creeping doubts and can be the trigger for the gradual erosion of power, an erosion or challenge for which Celestine becomes the de facto figurehead.

Although this is a plot that has been written before – how the actions of one person can challenge and even destabilize a regime – it is well-written, engaging and exciting. The reader can empathise with Celestine and one finds oneself willing her to succeed. The book has been set up for a sequel, which will please the readers of this first part in the series.