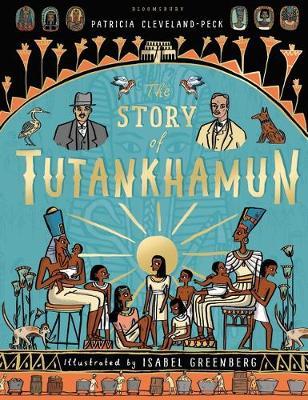 The history of Tutankhamun, boy-king of ancient Egypt, and the epic discovery of his burial chamber and fabulous treasure, is fascinating. From the life and untimely death of Tutankhamun himself, to the rumours of the Mummy’s Curse which were attached to the opening of his tomb in 1922, there has been much interest and mystery surrounding Tutankhamun. Patricia Cleveland-Peck and Isabel Green have given us a strikingly dramatic and engaging presentation of the history that should pique the curiosity and interest of young readers.

This book is divided into three parts. The first part deals with the life and times of Tutankhamun himself, with what is known of his family, his upbringing and some details of the times he lived in. This section includes, among other things, an illustrated explanation of the process of mummification that should appeal to the more gruesome-minded young readers.

The second part of The Story of Tutankhamun focuses on Howard Carter’s famous search for the burial chamber of the boy-king. This is the longest section of the book, as far more is known and recorded of this event. Greenberg illustrates both the events of the dig itself and the details of the find, from the sarcophagus to sandals found in the chamber, with a dramatic energy. I particularly enjoyed the pages describing and illustrating the various rumours about the Mummy’s Curse that was supposed to fall on anyone opening the tomb. Cleveland-Peck debunks these myths in a few well-chosen sentences.

The third part of the book deals with developments in archaeological knowledge since Howard Carter’s time, including new forensic evidence about what caused Tutankhamun’s death. Cleveland-Peck also outlines some of the mysteries that still remain in our understanding of the boy-king’s life and times. These are the questions that future archaeologists and historians may grapple with. Maybe those future historians are kids now reading and being inspired by books like this one?

One of the things I most appreciated about this book was its scholarly approach to the historical interpretation. A big problem I have with many histories and biographies is when theory, unsupported by evidence, is presented as fact instead of acknowledging that there other possible interpretations. Patricia Cleveland-Peck has, instead, taken the path of presenting what is known and provable, and highlighting the most common theories that have been developed to fill in the blanks in what we know of Tutankhamun’s history, while acknowledging that these are open to interpretation. The ongoing developments in historical research have also been acknowledged, such as the use of CT scans and DNA tests, and the gaps in our current understanding of this period of history. This approach, rather than spoon-feeding information to the reader, challenges them to think about the evidence at hand, and hopefully to question further.

The Story of Tutankhamun takes fascinating historical details, dramatic illustrations, maps and archaeological methods, and packages them into a well-written and beautiful book that would suit young historians (and fans of the Horrible Histories series) aged from 9 to 12.