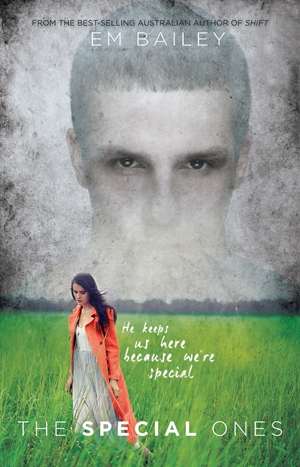 Four young people are being held captive on a remote farm with no modern luxuries like electricity or packaged food. Forced by a strict set of rules, and knowing that they are being watched, they must pretend to be the people from a 100 year old photograph. Their captor has developed a website so that their ‘immortal’ lives are broadcast to eager followers and every evening the captives must access an online chat room to impart their wisdom and share their knowledge of living safely away from the toxins of modern life.

To begin the story we see life from ‘Esther’s’ point of view. Through ‘Esther’ I could feel their fear, their loneliness and their longing, and sense the captor always watching. Forced to sew clothes, bake bread and make candles,  ‘Esther’s’ life is limited to the house and the veranda. She is not allowed to touch people nor look at Harry for more than three seconds. If any of the captives break a rule, jeopardising the role they play, one or all are severely punished or ‘renewed’.  I found myself watching and listening carefully to every character as I waited for one wrong move; I even cringed expecting punishment.

For the first third of this novel I initially applauded ‘Esther’s’ strength in trying to help smooth their harsh conditions and guide the captives away from fatal character errors but, when I learned her secret, I was disappointed at her subjugation. ‘Esther’s’ secret is only one of the twists which helped reshape my opinion of the story. My thoughts were turned upside down like this in several places yet I did not lose the momentum of the story; certainly a literary skill!

Easing me in, like the calm before a storm, the story gradually builds pace and a sense of urgency until we are given glimpses into the mind of the psychopath, and then… disappointingly, the build-up plateaued. Unfortunately this is where the author seems to be hacking away at the story; the events are discordant, jarring on my nerves a little and there is barely enough literary ‘meat’ or descriptive passages to provide background to the unfolding events.

I was left feeling that there had to be more.  Could this be the wonderful feeling I have when looking forward to a sequel, or is it merely a poor ending? Sometimes an author finishes a book abruptly leaving you unsatisfied but, in this book, there are several teasers, for example, [possible spoiler]is the captor’s ditsy neighbour, Mrs Lewis, the same person as Detective Lewis from the Fraud and Extortion Squad? I am also keen to read more about this captor and the author’s perception of a mental illness that can develop such immense emotions and the drive to act upon them.

The Special Ones was a compelling read for me. Although I lost the emotional connection to the victim, I became immersed in the mind of the villain and concerned about the values of our communities. Highly recommended to readers 15yrs + with lots of juicy topical issues to talk about.