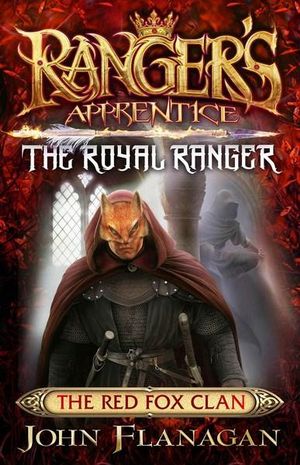 The Red Fox Clan is Book 2 in the Rangers Apprentice : Royal Ranger series; one of the four series of books John Flanagan writes for primary aged children who highly anticipate the arrival of ‘the next book’.

The Red Fox Clan is a journey about life as much as a physical journey through the provinces of Araluen, Picta and Celtica. Maddie is royalty, a role that doesn’t inspire her with its inherent restrictions and expectations.  However, Maddie is fortunate to also be an apprentice Ranger which gives her freedom for 11 months of each year to learn combat techniques and gain weaponry expertise amongst a group of adventure-seeking Rangers, under the guidance of Will Treaty, her mentor and trainer.

When we meet Maddie, it is time for her return to Araluen Castle for one month to take on royal duties as Princess Madelyn; and it all seems incredibly dull until she discovers the tunnels within the castle, ancient tales of mystery and, alarmingly, what seems to be a plot against the Crown.  Maddie must keep her Ranger skills a secret as she tries to unfold the devious actions of others around her.

While The Red Fox Clan is indeed an adventure, it is more about intrigue and cunning than action-packed incidents.  This book requires the same problem-solving skills that John Flanagan expects of his young readers and the imagination to take themselves into an unreal world.  And in his usual style, Flanagan asks readers to consider a range of issues along the way – what it is to be part of a team, a member of a family; how do we know who to trust or to show our trustworthy selves to others?

Maddie must possess the maturity of one much older.  She needs to be self-reliant and, even though she abhors her royal role and yearns for the freedom of a Ranger, she is respectful of her position and responsibilities, and of those around her.

This is a quest; good triumphs over evil and the characters gain resilience through the challenges and experiences they encounter along the way. John Flanagan is a skilled master in this regard.  And, while the main protagonist is female, there is a range of both male and female characters to keep young readers engaged right up to the very last paragraph.

My grandsons – Mr Eleven and Mr Eight – are desperate to know when I might be reviewing Book 3 in the Rangers Apprentice : Royal Ranger series.  Without applying too much pressure on John Flanagan, I hope he has his head down writing at this very minute.