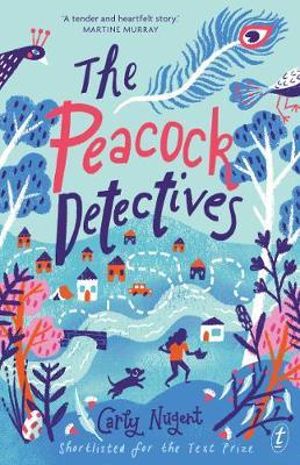 Cassie Anderson is eleven-going-on-twelve and has decided she wants to become a writer. When her neighbours’ pet peacocks go missing she thinks the search for them will make a good story. Little does she know that the year that it takes to recapture the peacocks will be filled with so many adventures and unexpected events that her family, her friends and her view of the world will be transformed completely. By the end of the book Cassie has acquired real wisdom as she tries to work through all the issues she comes across, and discovers that her ability to tell stories to make sense of events can also help her see people in a new light.

The Peacock Detectives is told completely through Cassie’s point of view. She is an engaging narrator with a strong voice and an optimistic outlook, even in the face of very difficult issues such as parental mental illness, adoption and the loss of a grandparent. Since the story is being written in Cassie’s notebook, it has a real sense of immediacy, taking the reader inside her thoughts and emotional reactions as though she is talking to you directly.  Cassie’s ambition to become a writer means she often diverges from the story to explain particular writing ideas, such as inciting incidents and catalysts, how to describe things with the five senses, and what themes are. This ‘tell’ is balanced by lots of ‘show’, such as the vivid descriptions of where she lives, which invoke scents, sights, sensations and many other insightful observations.

All the characters in Cassie’s story are fully rounded and sympathetically presented through Cassie’s perceptions. Her ability to seek the good in people carries her through some emotionally fraught incidents, such as when her best friend runs away to find his birth parents, or when she comes to understand why Rhea, an older girl at the school, is mean to her. Nugent demonstrates real insight into how an imaginative eleven-year-old will understand what is going on around her.

The Peacock Detectives is a delightful detective story, a how-to manual for aspiring young writers and a sensitive portrayal of the complexities of growing up.