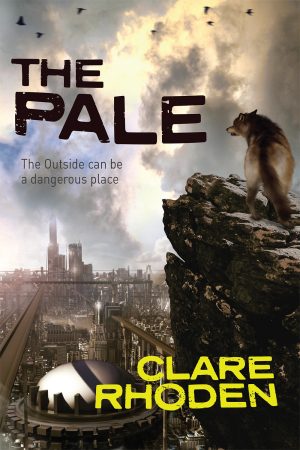 The Pale is set in a post-apocalyptic world where survivors are divided into opposing and starkly different groups. Tribes, Settlers and the Canini exist outside of The Pale. They have had a tumultuous existence since the catastrophic earthquake that shattered the world. However within The Pale, the humachines have lived regimented and peaceful lives.

The story begins with these two worlds colliding in the form of Hector, a human boy who is brought into The Pale by Tad, a humachine who is part of a guard protecting the wall of The Pale. Hector is not only organically different to the humachines, he also has contrasting core values which influence Tad and develop in the humachine “too great a portion of empathy…and not sufficient rationalism”. For the supreme ruler of The Pale, the Regent, empathy is the enemy.

I often find the first few chapters of science fiction novels difficult to engage in as the creation of a technologically dominated world can be overwhelmingly wordy and ultimately confusing. However, Rhoden constructed a world of biomachines, talking and civilized canines, ferals and complicated futuristic technologies in such a way that captivated me from the start. All characters are personified and relatable, no easy feat given the diverse forms of life in and out of The Pale and the movement of perspective in the many sections of the story.

Rhoden has also written a story that provides thought-provoking commentary on our world today and where we are heading. Do we rely too heavily on technology and will that ultimately be our downfall? Rationalism versus empathy, does survival require one to cancel out the other? And what does it really mean to be human? These questions are presented in a meaningful plotline with engaging characters.

I would recommend The Pale for any dystopian science-fiction lovers over 15 years.