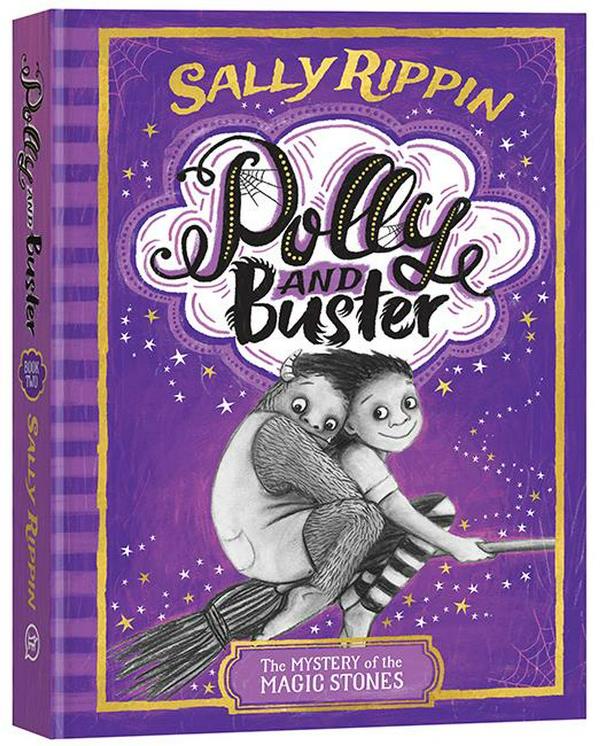 The Mystery of the Magic Stones is the second book in Sally Rippin’s Polly and Buster series and the opening scene is set just a few moments after the ending of The Wayward Witch and the Feelings Monster (2017). Although this book includes a short “What came before now” chapter, readers who have not read the first book may struggle to follow the storyline as there are frequent references to past events.

The Mystery of the Magic Stones focuses on Polly and Buster’s conflict with the “Witches Against Monsters” movement, which is advocating that monsters continue to be treated as second class citizens in Blackmoon Coven. Readers will enjoy details of the magical world, such as spell-casting, unusual pets and of course flying broomsticks!

The plot introduces concepts such as bigotry and segregation. Although Polly and Buster’s friendship becomes a rallying point for the conflicting parties, they must also focus on discovering the purpose of the magic stones, which helps her process the grief she is feeling about the death of her father. These two plots slowly come together as the book progresses. In some scenes the relationship between Polly and Buster is quite physical (for example cuddling), and Polly has a very close relationship with her teacher (such as Miss Spinnaker stroking Polly’s hair and generally taking on a mothering role). Considering these themes and relationships, I strongly recommend that parents or teachers read The Mystery of the Magic Stones to ensure it is suitable for their intended audience, or read the book aloud with children.

Secondary plots are hinted at, such as Polly having dyslexia (although the term is not used) and being bullied and excluded by her classmates. Buster is portrayed as the epitome of a true friend and an easy-going character in general, whereas Polly demonstrates more complex emotions and often struggles with conflicting factors while making decisions. This may help children identify and manage these issues, and help them understand how to weigh up different factors when they are confronted with difficult situations.

The text is supported by lovely smoky images (also by Rippin) that complement the fantasy setting and personify the monsters. At times, different fonts and sizing is used for emphasis but does not detract from the flow of text.

Overall, this title introduces many concepts and although simply an enjoyable read, it could also be used to open up discussions about several topics in a non-threatening way. The Mystery of the Magic Stones is an ideal length for an early chapter book, and the ending leaves the plot open for a third instalment.

Published by Hardie Grant Egmont, the title is a lovely matte hardcover that looks great and will survive a bit of backpack bashing. This title is similar in nature to The Worst Witch series and is recommended for ages 8–12.