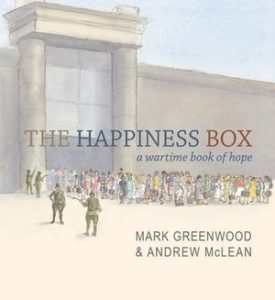 Two of Australia’s best children’s book creators have collaborated on this picture book about one of our national treasures. The original ‘Happiness Box’ is a hand-drawn and typed book created in captivity in a prisoner-of-war camp in Singapore in 1942 as a Christmas present for children interned in Changi prison by the Japanese. It was written by Sergeant David Griffin, later Sir David Griffin, and illustrated by Captain Leslie Greener, both of whom survived the war.

This current book begins with the fall of Singapore and the harsh conditions inside the camp. The soldiers were concerned that the children in the nearby prison would receive no Christmas presents. They asked for permission to make some and the camp commander agreed, although subject to him inspecting the final results. While many troops made toys, Griff’s talent lay in storytelling so he wrote The happiness box about animal characters. Unfortunately he named one of the main characters Winston and General Saito became suspicious. One of the other inmates, Captain Phillip Head, offered to destroy the book but secretly buried it in a cordite container, along with 8th Division records.

The box was retrieved after the war. The book was published in 1947 and again in 1991. The original was donated to the State Library of New South Wales and toured the country in the National Treasures from Australia’s Great Libraries exhibition. This factual picture book tells this amazing story in a very matter-of-fact way. There is no strongly emotive text about prison-of-war conditions and harsh Japanese treatment but this can be inferred from the illustrations. Two pages of extra information at the back of the book augment the facts and a list or research sources is also provided.

This is a fascinating episode in our war history and it is really pleasing to see it told and illustrated so well for young readers. Recommended.