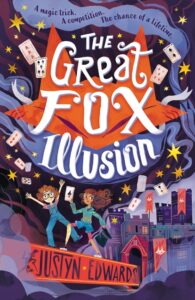 Many recent middle-grade books have included elements of fantasy and magic, though not all have been successful. The Great Fox Illusion by Justyn Edwards is a refreshing change from the ordinary “magical” formula simply because it is magical in an entirely different way. That’s right; step right up, readers young and young of heart, to see the greatest magical illusion the world has ever seen!

The Great Fox Illusion is written as one grand magic trick – we know this because it’s right there in the forward.

This book is a trick. Please don’t sit back and enjoy it. In fact, don’t take your eyes off it for a second.

As with all great magic tricks, the audience (or the reader in this case) is so distracted by the flair, the sleight of hand and the misdirection that we forget to keep our guard up. So, what’s the trick?

One of the world’s greatest magicians, The Great Fox, has died. He has no heirs, so his legacy is to be bestowed upon the winner of a TV show contest, which fans are competing to enter. Flick Lions is one of them, and she will do anything to win.

But she doesn’t care about his legacy. The Great Fox ruined her life when he stole her father’s greatest trick, and Flick is determined to get it back.

What follows is a delicious, mystical romp through the great magician’s mansion where danger looms, and dark secrets are revealed.

The Great Fox Illusion is the debut novel of author Justyn Edwards, a modern-minded writer who has clearly been listening to what parents and teachers have been crying out for – more diverse characters! He portrays Flick’s struggles with her disability – her amputated leg – realistically. Flick’s prosthetic leg does slow her down sometimes and causes her pain from time to time, but it is not her defining characteristic. That characteristic is her no-nonsense determination, and she displays it wonderfully.

Middle-grade readers will fall in love with Flick and the world within that she inhabits, for The Great Fox Illusion would be nothing without its setting. Much like Hogwarts and The Deucalion Hotel, The Great Fox’s mansion is as much a character as is Flick or The Great Fox himself. The book would be a completely different tale without the talking lift, movable walls, and the Fox Files’ digital library.

This brilliant debut novel will leave readers scratching their heads trying to figure out what just happened. The Great Fox Illusion is a magical story brimming with adventure, illusion, and friendship, perfect for those who loved the magic and wonder of Alice in Wonderland or the mystery and adventure of Skulduggery Pleasant. Luckily, the second book in the series is currently being edited, and rumours of a third are brewing!