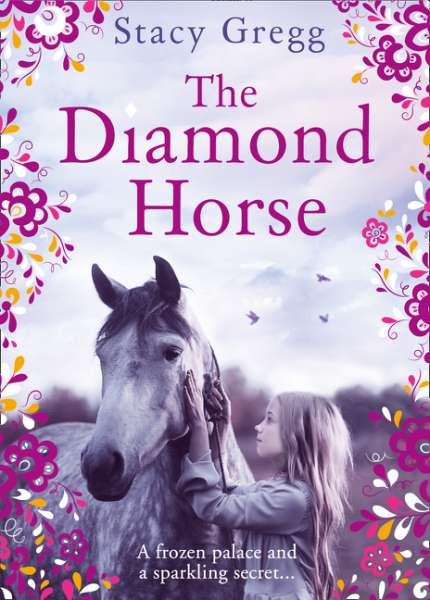 The Diamond Horse tells the stories of two courageous young girls who live in different, incredible circumstances. They share a love of animals and a special friendship with their horses, both which belong to an unusual breed, the Orlov Trotter.

Anna is the daughter of a wealthy Russian count who breeds animals and, as a result, she has a tiger and a wolfhound as her companions. These animals come in handy when she stands up to her horrible older brother and later, when she finds herself lost in the forest during a snowstorm. Her story is inspired by Orlov Khrenovsky who developed the Orlov Trotter in Russia in the late 1700s.

While Anna’s story makes up most of the book, it is interspersed with chapters about a second girl, Valentina. Her story is equally intriguing. Valentina is an orphaned circus star who performs acrobatics and trapeze with her pink horse, but dreams of riding dressage. The two stories are linked by the diamond necklace both girls own, bequeathed to each by their late mothers. Both Anna and Valentina are strong-willed, brave, hard-working and clever – the kind of lead characters I want my daughters to read about. Both girls’ stories are compelling and there’s the tiniest hint of magic too.

New Zealand author Stacy Gregg has ridden horses since she was a child. She has woven plenty of horsey information for horse-mad young readers into the book, but not too much to overwhelm those who are just after a good read. This book is aimed at readers aged 9+.  Stacy Gregg is also the author of the Pony Club Secrets and Pony Club Rivals series.