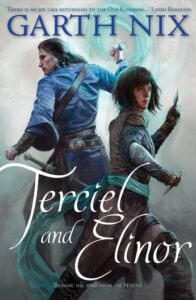 I am a long-time fan of Garth Nix’s writing, and anyone with an interest in Australian fantasy and YA fiction is probably already familiar with his name. From the Old Kingdom series, to Frogkisser, and everything in between, Nix always delivers on magic, mystery, and worlds in which to get lost. Terciel and Elinor takes us back to the award-winning Old Kingdom series, and tells the story before Sabriel of how Sabriel’s parents met, and it delivers on the magic and danger in spades.

This is a book that works best if you’ve already read Sabriel. Although it would stand for first time readers dipping their toes into the Old Kingdom, there are references that make much more sense if you know the series already. It acts best when adding depth and richness to a lore that is already familiar to readers. That said, if you haven’t read Sabriel and the entire, immersive series, what are you waiting for??

In Terciel and Elinor, we get to go back to a time when Terciel was Abhorsen-in-Waiting, learning the terrifying skills he’ll need to wield the Abhorsen’s bells that protect the living from the Dead in the Old Kingdom. On the other side of the Wall, in Ancelstierre, Elinor has been raised in isolation at Coldhallow House, unaware of her links to the Old Kingdom and the power in the unsightly scar on her forehead that her mother has made her hide.

In one terrifying night of fire and death, Elinor loses everything she knows and cares about, and meets Terciel for the first time.

Something deep and dark and powerful is stirring up the Dead, and if Terciel and Elinor don’t move fast to stop it, then there won’t be much hope for the living.

One of the things that Nix does so very well is build worlds that feel like readers could walk into them. The richness of setting and atmosphere was a joy to read in this book and kept me immersed from start to finish. I delighted in the moments at Wyverley College, and the relationships that Elinor forms there, and the Old Kingdom always feels like somewhere I could reach out and touch. The moments of heart-wrenching loss and terror are equally profound.

The story keeps the pace moving, following Terciel and Elinor in their separate stories, and weaving them together in the moments when their paths come together. Elinor is a young woman trying to find her feet after a lifetime spent isolated from the world around her, and learning to make her own path. It was interesting to see how the apparently childish play-acting and juggling that she has clung to plays its part in forging her future and forming connections.

Terciel, in a very different way, has dealt with his own form of isolation, as the future Abhorsen with a grim duty that no one but his ageing and increasingly irascible mentor can possibly understand.

There are glimmers of romance in Terciel and Elinor’s story, and a fadeout love scene, as one would expect from the tale of Sabriel’s parents. We see glimpses, too, of what is to come in their future together, but the focus of the novel is very firmly on the adventure, and the dark challenges that they face both separately and together.

The themes of life and death sit at the heart of the entire series, and Terciel and Elinor adds a few more threads to the larger philosophical questions that the rest of the series explores in more depth. It requires enough maturity of its readers to handle death, sometimes violent on the page, and life, with its awareness of love and sex.

The nature of this book as a prequel, and the way that Nix has chosen to frame it, touches briefly on the question – if you already know how the story ends, or how your life ends, then how does that affect the way that you see the path that gets you there? Much as the reader who has already read Sabriel is familiar with where these characters go, and how their futures play out, Terciel and Elinor are given glimpses of their lives ahead. It would have been interesting to see this teased out a little further, and could make for a very interesting discussion in a classroom or bookclub setting.

For fantasy fans aged 13 and up, Terciel and Elinor is going to deliver a piece of a beautifully realised world, and gripping events, with much to leave them thinking. Whether readers are stepping into the series for the first time, or returning enthusiastically to a world that they know and love – Welcome to the Old Kingdom. I hope you brought your bells.

Terciel and Elinor has been shortlisted in the 2022 Book of the Year Awards for Older Readers.