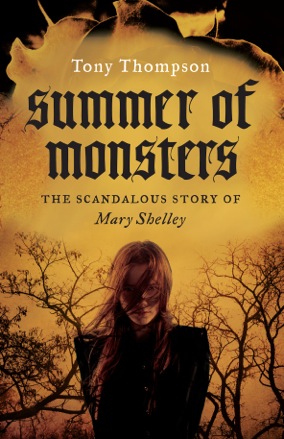 Here is a hugely ambitious book, perhaps overly so, and certainly beyond many young readers, except those with a confirmed interest in the literature of the 19th century, and the British poets in particular.  It features not only Mary Shelley herself; but focuses on the physically beautiful ‘Mad’ Percy Shelley as he was dubbed by his fellows at Eton, the visionary, the enthusiast, the radical anarchist, the revolutionary and profligate poet, and also on Lord Byron, with references to Keats and other literary and social luminaries of the age.  Along with the literary background, the social scene is clearly delineated.  Mary’s mother was the well-connected Mary Wollstonecraft and her father the esteemed scholarly William Godwin.  So Mary, from an early age was acquainted with the literary and social milieu of her era, in that when Shelley first appears at Mary’s home the conversation takes in education – Rousseau – and the social and literary concerns of the day.  Godwin, for instance, raises the question of the Luddites, by questioning Shelley on his opinion of their cause.

Thompson has researched widely and therefore perhaps swamps young readers with detail, even though it is contained within the human story of Mary and her stepsister Claire and their relationships with Shelly and Byron in particular.  That relationship as the book progresses entails the poets’ use of drugs (laudanum in particular); and their sexual exploits though never dramatized, are implicit.

This book is a vast tapestry of relationships centered on Mary, Claire, Percy Shelley, Lord Byron and a Doctor Polidori in that mention of Polidori allows the writer to discuss medical issues of the period.  The structure is that of an unfolding narrative through relatively short sections beginning at St Pancras Churchyard, 1801where Mary’s mother who ‘had consorted openly with a married man’, is buried and where Mary visits her grave.  The following short section is London, 1803 in which Mary meets her repulsive stepmother and her daughter Claire.  From then on each section is dated and placed: from London, 1804 through back-flips like Eton College, 1803 where the young Shelley is bullied; then later Belgium, May, 1816 where we learn that Lord Byron’s trouble with women had begun early in his life.  Later the reader moves to Edinburgh, 1814 where John Polidori in need of a human brain to complete his degree obtains it by stealth in a graveyard.

So the book progresses and the tale unfolds, moving from one setting and time until the final and longest, and perhaps most dramatic, episode set in Switzerland, June, 1816.  There is an Epilogue detailing factually the publishing of Mary Shelley’s still read Frankenstein, and the fates of the other players in this intriguing story of malice, love, loss and flagrant sexual bravado.  Thompson pulls the ends together including Percy’s tragic death by drowning.

This is hardly a book for children: rather it is for anyone even faintly interested in the history of English literature, but especially such poets as Shelley and Byron who tower over their contemporaries because of a certain flamboyance as well as their defiant yet visionary and romantic voices.

Read our interview with Tony Thompson.