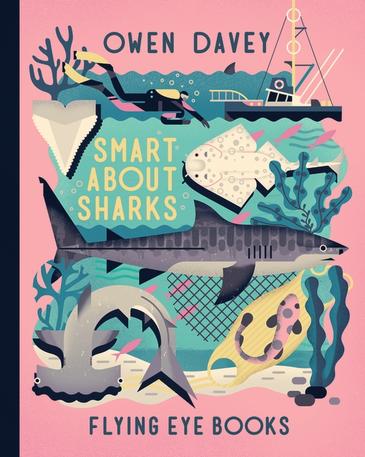 Smart About Sharks is the latest offering from the author of the bestselling Mad About Monkeys. Flying Eye Books is a publisher that aims to take children’s eyes “on a journey of wonder”, and this informational book about sharks for readers 12-14 is no exception. The immersive illustrations by author/illustrator Owen Davies are striking, with a restricted colour palette and flat geometry that create an interesting vintage look. I was pleased to see FSC paper used (which comes from responsible sources) – this sends a great additional message to readers about caring for the environment.

However, the information is not always presented in the most logical way, which could be a source of confusion for some readers; especially those who tend to skim. For example, a double-page spread headed What Are Sharks? features a large illustration (over half a page) of various animals that are not sharks, but which are eaten by sharks. To my mind, that illustration would have been better suited to the page titled A Bite To Eat. The illustration in question does have a subheading just above it, but some young readers may not be familiar with the expression “Nom Nom”.

Similarly, the section on the shark’s evolutionary history is headed All Fins Considered. While undoubtedly a witty title, I don’t know if it adequately explains or introduces the contents of the page, which is not ideal for an informational book. The Contents page lists quite a number of headings that I suspect may leave many readers none the wiser.

A biological consultant’s input would have helped to avoid scientific inaccuracies such as “shark skin is covered in tiny teeth called denticles”. (In this context, tooth-like structures would have been a more appropriate description for denticles.)

An index to shark species is provided at the back, but a glossary may have been more useful.

On the whole, Smart About Sharks is an attractive and interesting book that is best suited to general readers and art lovers rather than young biology students.