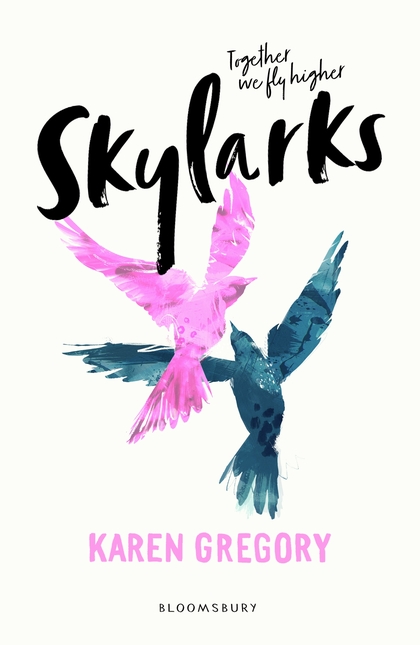 We watch the bird as it flies high above us, singing like it’s the only thing in the world that matters. And I feel it – that life can be beautiful. That there are possibilities.

Skylarks proved to be both an empowering and thought-provoking read. The protagonist, sixth-former Joni, comes from a family that struggles with money worries. Her love interest Annabel is a blue-eyed girl from a very well-off family, whose eyes remind Joni of the “sky on the downs in the summer.” When Joni meets Annabel in a library, a budding, sweet, first-love romance ensues. However, when Joni gets caught up in a campaign to save the tenants of Cherry Tree Estate from eviction, things get complicated for both girls.

It is very refreshing to read a same-sex romance in which something other than homophobia – in this case, classism – drives the main conflict. This YA offering is a wide open view of the struggle life is when you don’t have enough money to pay the gas bill or even to buy the next meal. The idea that ‘life’s not fair’ is a recurring theme in the story and is examined from both the rich and poor ends of the spectrum. Each character and side-character deals with their situation in different ways, from rage to anger to hopelessness or passivity. Joni’s character is well-portrayed and her growing awareness of the economic divide fuels her coming of age arc. I found myself thinking about the story as I went about my everyday life afterward, about how much money one has or lacks is a yardstick by which many are judged, either overtly or subtly, something that Joni wakens to along the way.

Other themes – being free to love who you want, and being free to stand up for what is important to you – tie in well with the title of the story and the lovely illustration on the front cover. I enjoyed the emotional punch of the climax and the hopeful note on which the story ended.

Content includes a little nudity and mild kissing scenes and Skylarks is most suited to teens 12 years and up.