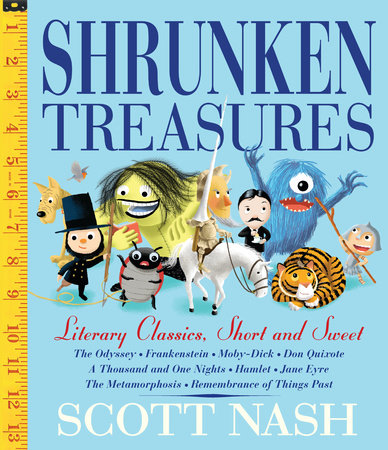 I am a little puzzled by this book. It has a sub-title of ‘Literary Classics, Short and Sweet’. It has a brief introduction saying the author has invented a device called a ‘versizer’ which reduces ‘thick, voluminous literary works to children’s verse’. The ones so reduced in this book include The Odyssey, Frankenstein, Hamlet and Kafka’s The Metamorphosis. In this version, The Odyssey  begins ‘No wussie was Ulysses’.  Moby Dick  is eight verses long and we are instructed to sing it to the tune of ‘Mary Had a Little Lamb’.

The book is extensively and rather endearingly illustrated and includes, at the end, a half-page explanation of each classic. Even here, however, the explanation or description of many of the original literary classics is humorous.  Perhaps this is a book which needs adult input for a child to get the most from it, at least on initial acquaintance?

The intention, of the book, says the author, is the hope that readers will recite and sing the ‘shrunken treasures’ many times to themselves, until they are old enough to read the originals. Will such a book entice them to read the originals eventually? After all, reducing the classic Jane Eyre to a few verses, for example, removes the psychological aspects so important to the plot. I suspect that children will read these verses as ‘stand-alones’, without any real understanding of their origins. Maybe some of them will then go on to read the originals in twenty years or so, but how will we know?