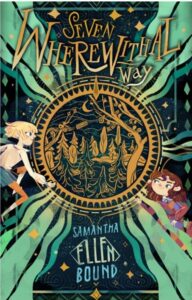 Eleven-year-old Celeste is having her worst summer ever! She’s been sent to stay with her Gran and keep an eye on her pesky and immature little sister Esme. Celeste resents her parents going off having adventures, leaving her behind, being boring. She’s thrilled when her eccentric cousin Ferd appears from the sky in their flying bus and invites them to come to their magic home at Seven Wherewithal Way. How can she resist?

This is the first book I have read where the pronouns they/them are used for a character. It does take some getting used to, but it’s encouraging to see this inclusivity in a book aimed at young and impressionable readers. I hope that soon it will be so normal it won’t even rate a mention!

Celeste is looking for adventure, and Ferd certainly throws her into the deep end, fighting all manner of mythical and magical monsters on their mission to rescue Ferd’s dear friend the Leshy. First there are the poleviks, followed closely by the striga, rusalka, vodyanoi and ultimately Baba Yaga. It’s a veritable who’s who of folklore bad-guys! In fact, a glossary would be a welcome addition to this book.

Bound has certainly done her research and this book positively overflows with characters many readers will recognise from fairy tales, folklore, and myth. And herein lies a problem with the book: too many incidents with too many conflicts with too many monsters before the resolution. I feel this book could easily lose the middle third and be a tighter and more cohesive story. As it is, the characters lurch from one conflict to the next with barely a chapter-break. However, it picks up dramatically in the final chapters where the author suddenly finds her voice allowing the story a much better flow.

Celeste is a girl on the cusp of adulthood, hoping to find her inner strength and demonstrate her bravery. Her little sister, Esme, however, is a totally unappealing child who behaves more like a five-year-old than an eight-year-old, pouting and whining her way through the story. The constant (and I mean constant) nasty fights and bickering between the sisters is grating – I’m not sure if it’s intended to be amusing, but it’s not!

Celeste discovers at the end of her adventure that ‘bravery is not always how fast you can swing your arms or think up clever escapes. It is the way your heart responds, and how you follow it’.

Seven Wherewithal Way is the first book in a ‘portal fantasy series’. It ends with an obvious segue way to further adventures. It’s recommended for middle grade readers.