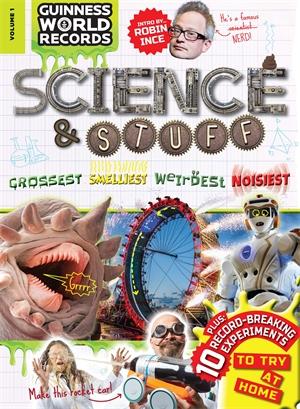 Packed full of action, interesting and weird pictures, facts, stats, world records and some pretty intriguing stories not to mention cool experiments, Science & Stuff is designed to capture the interest of a broad readership. With an introduction by scientist and broadcaster Robin Ince, contents include traditional subjects such as space, robots, inventions and world record breakers, from a less traditional perspective. Why, for example, has cabbage been banned from the International Space Station? And what can cats teach us about the laws of physics? Can a penny dropped from the Empire State Building really kill someone? Apparently not.

A thoughtfully compiled exploration into the disciplines of biology, physics, astronomy and chemistry it challenges, questions and explores the young scientist in an accessible way that may draw in the most reluctant of readers. Kids can also visit the Guinness World Records website to access photos, quizzes and puzzles that will test their scientific knowledge.  Highly recommended upper primary level +