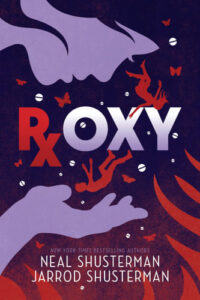 Above our world is a toxic wonderland where the Party has raged for centuries. Humans know the partygoers simply as “narcotics”, “opioids”, “drugs”. But here they are malevolent gods, toying with the fates of mortals. Roxy and Addison have made a wager to see who can be lethal the quickest. Isaac and Ivy Ramey are their targets. Ivy is understimulated and overmedicated. Isaac is desperate to recover from a sports injury that jeopardizes his chance of a scholarship. This is the start of a race to the bottom that will determine life and death. One Ramey will land on their feet. The other will be lost to the Party. The only question is… which one?

Roxy is the latest Young Adult fiction outing from Neal Shusterman (author of the Scythe series, and Challenger Deep) and Jarrod Shusterman (co-author of Dry with his father Neal). It’s a well-written tale about two regular high schoolers trying to make their way in the world, never knowing of the whirlwind of addiction that is preparing to sweep them up in its wake.

The book is written from numerous characters’ viewpoints, a technique that works quite well in telling the story from different angles and unravelling the narrative in a way that builds suspense. The characters are well crafted, and the pacing of the story is perfectly timed to meet its ultimate crescendo.

It would be impossible to talk about Roxy without talking about its central theme. Unfortunately, where Challenger Deep is a poignant and confronting narrative about mental illness, Roxy’s attempt to make a similar comment about substance abuse and addiction misses the mark somewhat. If the book was set in a mythical world and the premise had been about an actual race of near-immortal godlike beings who toyed with mortals for sport and this was used as a metaphor for the experience of an addict, I could handle that. But this is not that. This is set in modern day America, with real people, and the drugs are… well, drugs. Essentially, I question the wisdom of presenting the drugs as characters in their own right, complete with personalities and voices of their own. Not only that, but also with their own sense of agency, and the ability to carry out their own plans and act on their own desires. I get that it’s fiction, and with other topics it might be ok, but I’m not sure about this. Personally, I don’t think it’s ok to posit a situation where the drugs have more agency than the humans do, or to suggest that drugs have a mind of their own and are out to get you. Nor will a drug of addiction decide – on its own – to do the right thing and leave you alone. The opioid addiction is a significant social issue all around the world. I’m aware that I might be the lone ranger on this but the whole concept just didn’t sit right with me.

Having said that, however, it is a compelling story that has been impeccably and poetically written, and for those in the 16-18 age bracket who are less likely to take certain aspects literally, it would make an engrossing read.