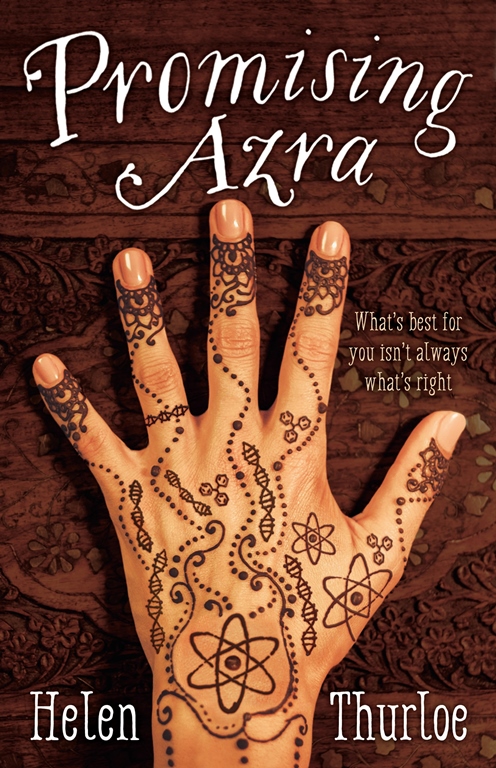 Azra is a 16-year-old science geek. She knows the periodic table and can make jokes about it. She hates having to pick up her sister, Soraya, after school ends every day and she will never understand her big brother, Rashid, who is the very definition of a layabout. She has parents who love her, and want what’s best for her and in her case, that includes supporting an arranged marriage to a man 11 years her senior in Pakistan.

This is the life Azra lives, and when the book opens, Thurloe introduces us straightaway to arranged marriages, through Azra’s friends – some of whom are looking forward to leaving school to be wives, and others who gossip about when their next friend will be promised to a man they don’t know.

Azra is a typical Australian student, I think that’s what will strike readers the most. She has her favourite teachers and her best friends, and she even meets a boy she finds herself liking while practicing for a science competition. But away from school, Azra lives a frustrated life, with her ambitions being stifled by her traditional parents who make life difficult for her – from expecting her to do women’s work to refusing to let her do what she wants, and by that I mean take part in a science competition when there’s a family picnic to go to.

Thurloe takes great care in building the different parts of Azra’s full life – I found myself envying Azra’s natural aptitude for chemistry and science, and mourning her potential being stifled by the traditional aspects of her family life. What I appreciated though, was that Thurloe very clearly delineates that Azra loves her family and her faith, but she wants things for herself too.

The author builds on Azra’s frustrations slowly, each chapter increasing the tension in her life as she tries to find a way to make her life at school and her ambitions mesh with that of her traditional family until she realises she can’t. Thurloe’s cast of secondary characters are evocative and will frustrate you, make you angry or you will find yourself cheering them on as they try to help Azra.

As the book reaches a climax of Azra leaving for her arranged marriage overseas, it becomes obvious that, to go to the police, to report that she is being forced into a marriage she does not consent to, is not an easy decision for her. Azra knows what she is losing – her family, whom she loves.

But the book is not without its flaws. If anything it could have reached the climax of the story sooner as the pacing dragged towards the end with Azra trying to figure out how to lie to her parents about something for one time too many.  Her life in the book, with regards to her parents, is built on lies by necessity but it could have been shorter.

Don’t get me wrong, this is a powerful narrative that hits all the right notes in telling this story. But the conclusion is weakened when it’s revealed that her uncle is behind the arranged marriage – I got the feeling that her parents were somewhat being forced into consenting to this marriage for her far earlier than they would have liked, but it is still what they would have wanted for her. When Azra makes the decision to think of herself and what she needs, there is no real confrontation with her parents.  Thurloe has written such a powerful relationship between the three of them that I wanted to see that confrontation happen.

Promising Azra pulls no punches in the story it wants to tell about arranged marriages and the difficult decision daughters and sisters are forced to make – to leave their families behind for a different future. The scary part is, it still happens, and readers will see the terrible emotional toll of a difficult decision in this story.