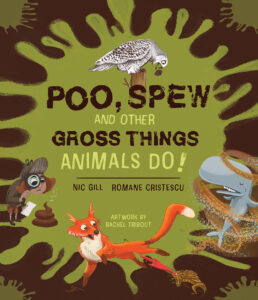 This is a book for any young reader who might ever have wondered, what exactly is poo? This book will let the young inquirer know that, apart from the 75% water in human poo, there are hundreds of millions of bacteria and viruses, plus some fungi. It is an ecosystem down there, full of creatures crucial to health. This book is packed with facts and information of the pooey kind that will bring readers to admire, marvel and boggle at the ways that nature finds to recycle what gets eaten.

On every human face there are tiny mites, named Demodex, that feed off the oil in skin pores, but fail to ever defecate. Eventually each of these creatures explodes. Yuk. The owl finds ways to regurgitate the feathers and bones it has swallowed. And along with poo goes farts. And then come the animals that eat other animals’ poo (the sea cucumber), and those that re-eat their own poo (rabbits and African naked mole rats). And just before it leaves its mothers’ pouch, a young koala eats its mother’s poo, to ensure it has the right bacteria in its own gut. Those eucalyptus leaves take a lot of digesting.

Young scientists will learn how to build a home with poo, what to do with snot, how to use poo to stake out territory, how to have a communal bath in excrement (and yes, there are many, many words for poo in English), and how to spray poo over ten metres (a hippopotamus party trick). Deep within this book is the secret of how to look like poo. On the theme of grossness, the short-horned lizard that shoots blood from its eyes takes the cake, well, perhaps not a cake, more a Dracula trophy. Flies are even more gross than anyone imagined.

Along the way in this book, other young scientists are introduced, such as Caitlin Henderson who is a spider specialist and Steve Lindfield, a marine scientist. And there is a dog to meet too, Maya, the koala-poo sniffer. Beyond all this excitement, at the back of the book there is a glossary of useful terms, a brief dictionary on how to say poo in twenty languages, and an excellent index. There are many photos and cartoon depictions, using lots of yellow and brown, to liven the detailed text. This is a book of practical science, an inspiration to young children who want to know about the world, especially its biology and ecology. It is a marvellous introduction to what science is and what scientists do.

Just when it seemed the age of reference books was over now we have the internet, along comes this essential guide to one of the most important things we do – and nearly every animal does. Congratulations to the CSIRO for producing such a book.