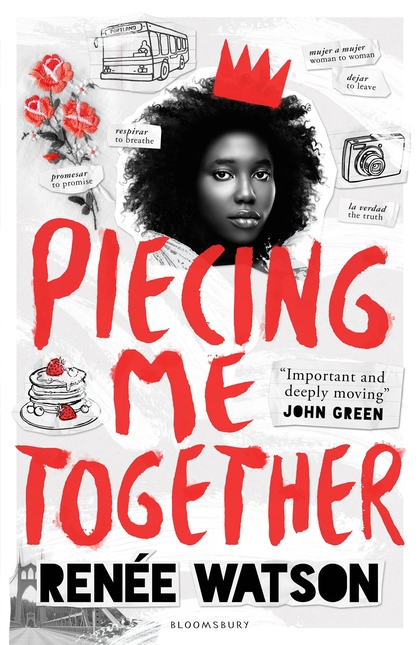 This coming-of-age story tells of Jade, an African-American girl who is clever and has won a scholarship to a private school some distance from her home. She feels as though she doesn’t fit in at the school as she is one of very few African-American girls and her mother, a single parent, is very poor.

Jade finds it very difficult to make friends at her new school, although she remains friends with one of the girls from her neighbourhood. Eventually she becomes friends with a girl who catches the same school bus. Sam is rather a loner like Jade and is also from a different socio-economic class than most of the other pupils. She lives with her grandparents which also makes her different from most of the others.  One of the reasons Jade was happy to go to the new school and willing to be a ‘scholarship girl’, was the possibility of being able to travel overseas on a trip to help in a third-world country. She is devastated when she is not picked for this, although she had very much expected to be and, to make it worse, Sam is picked instead.

Instead, Jade is signed up for a mentoring program for African-American students  by African –American women who are alumna of the school.  Jade doesn’t find her mentor particularly helpful, especially as the woman seems more concerned with her own romantic problems than really helping Jade with the kinds of life skills which will be of benefit to her. Eventually, after Jade questions her on this, the mentor ‘comes good’ and introduces Jade to her sister, a gallery owner.

Jade is a gifted collagist, so good that the gallery agrees to hold an exhibition of her work. Through her art Jade is really able to express herself and those around her come to recognize how gifted she is.

The book weaves a number of incidents of casual racism into the narrative, such as when Jade is waiting for her friend Sam in a dress shop and, unlike any of the white people, she is asked to leave her bag behind the counter. Her hurt at this treatment is exacerbated by Sam’s lack of understanding and refusal to see it as racism.

Jade is an interesting character, a girl of many parts, in a sense falling between two worlds. She feels very much as if she is a person of different pieces which are not coming together to make a unified whole. It is a coming-of-age novel, however and Jade does find an inner strength. She finds the courage to query why Sam has not supported her in challenging racist slurs, why she was not picked for the overseas trip and why people always thinks she is someone who needs help, rather than being able to give it. She also, through her art, finds a potential path in life.