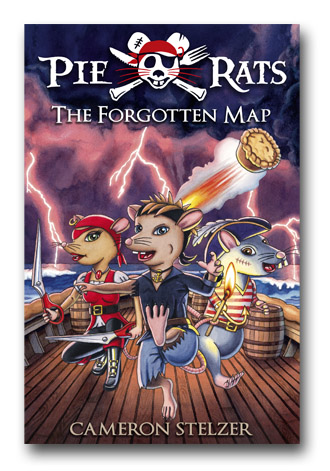 Wisker and his circus family are sailing on the Cyclone Sea when a huge wave washes him overboard.  Wisker is on the verge of drowning when he is rescued by a band of Pie Rats.  He becomes their pirate apprentice, learning how to shoot mouldy pies from cannons and to sword fight with scissor blades.  The Pie Rat’s adventure is to acquire a map and locate a mythical treasure.  Wisker’s resourcefulness and courage is utilised by his fellow rats to overcome any obstacles that they meet.

This anthropomorphic adventure story is a fast paced and action oriented.  Some of the language used in the story is influenced by rats, mice, cats and pie associated words, somewhat reminiscent of the language used in Geronimo Stilton stories.  Lovers of this genre will enjoy the cannon battles, sword fights, escape plans and tight situations that the character find themselves in.  Stelzer’s inclusion of maps, illustrations of the characters and the occasional newspaper article, letter or notice adds to the story, the first in the series.  Ages 8-11.  LBa