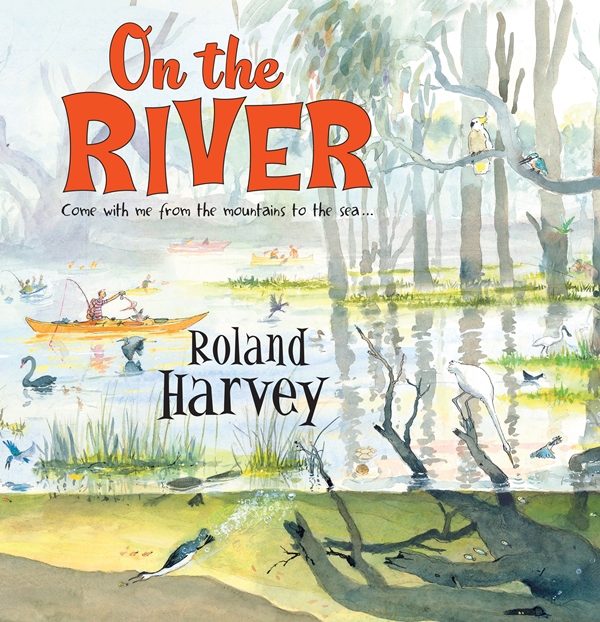 This next installment of Roland Harvey’s At the Beach series is On the River – a picture book about the Murray River, from its beginning in the high country to its end at the sea.

The first thing that struck me on opening this book was the extensive research that has gone into it. The endpapers alone could keep a reader happily busy for an hour or two!

As with the other books in this series, On the River has something for all ages. As the story follows the Murray’s course, readers have access to a wealth of information about the river’s geography, history (European and Aboriginal), ecology, people and animals, in prose that is at times poetic, occasionally profound and more often very funny. For example, “Mannum is a very old town, still largely in black-and-white”.

Young readers (as well as older ones) will find much to giggle at in the busy watercolour illustrations, which contain a delightful array of fine details waiting to be discovered. Watch out for the naked campers, bunyips (despite the sign that there are no bunyips to be found), and the man who is so immersed in a book about snakes that he’s oblivious to the snake near his foot. In Where’s Wally style, there’s an invitation to spot Roland Harvey on each page. And in a similar vein to Alison Lester’s Are We There Yet?, well-traveled and local readers will enjoy recognising familiar places.

Current environmental issues associated with the Murray River, such as poor water quality and water depletion due to agricultural use, have not been overlooked. However, these topics are dealt with in such a creative and entertaining way that the reader is left feeling wiser but not deflated. The story ends on an uplifting note, with recounts of recent positive action by local South Australian children, and indications of improved water quality at the river’s mouth.

On the River could link with a variety of subjects, from primary to junior secondary levels (Years 1 – 10).