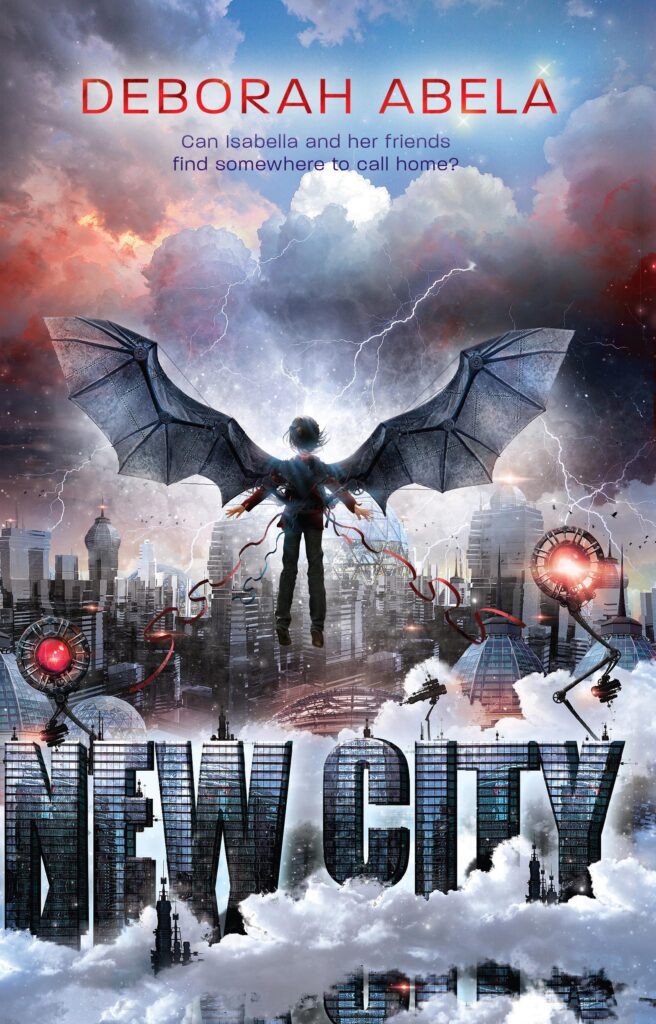 The seas have risen.  The Floods have been catastrophic.  In New City there is a strict curfew, enforced by the military.  But that doesn’t stop Moochers thieving food from the pantries of the rich.  Jeremiah, Bea, Raffy, Xavier, Fly, Griffin and Isabella are refugees in this new, dangerous world.

New City is the second in a series following these characters.  Previously they spent three years in Grimsdon, a city flooded, left without energy, these children separated from their parents and learning to survive.  They read Dickens’ Oliver Twist as they go, alerting us to the fact that this was a YA novel ahead of its time, and that the present story takes Dickens as a model for storytelling with gusto.  Hunger Games with its themes of combat, celebrities, surveillance, figureheads, sloganeering, and societies controlled by a military presence, is another model and inspiration for this novel.  With surveillance extending to attempts at thought control, including the banning of books, there are shades of that powerful template for futuristic apocalyptic fiction, Orwell’s 1984.  And with the homeless incarcerated in camps, there are echoes of our present social unrest over the treatment of asylum seekers, even down to the terms to use when referring to them, and the detention of children.

Isabella Charm carries the novel, for she is a natural leader, intelligent, and feisty—and she has to know the truth.  That is why she allows herself to be smuggled into the camps where the moochers are kept out of everyone’s way.  Isabella is the one who finally asks, ‘What kind of government locks up innocent children?’ She is the one who becomes a catalyst for the New City to show its human face.  This novel comes with notes that connect it with themes of the Australian Curriculum, to assist teachers to use the novel as a prompt for discussion.  Suitable for 9 to 14 year olds.