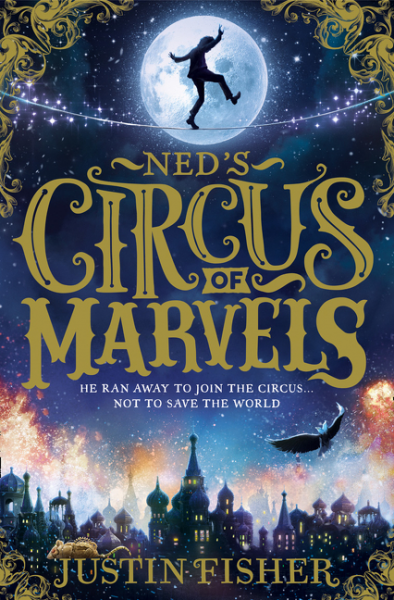 The circus can conjure feelings of child-like joy or inspire an undercurrent of menace, and Ned’s Circus of Marvels definitely fits in the latter variety. Opening with a dark scene of a nun being chased to her death by two shadowy men, we are then introduced to Ned, whose completely average and rather drab life is rapidly left behind on the night of his 13th birthday, when grotesque and threatening clowns chase him and his father out of their house, and set Ned on an adventure which marks him out as anything but ordinary.

First time author Justin Fisher has worked as a designer, illustrator and animator for film and television, and it is clear that he has a wonderful imagination. Unfortunately, letting one’s imagination run completely riot can lead to confusion, and Ned’s Circus of Marvels suffers as a result. Part magical fantasy, part steampunk, part adventure, the profusion of magical creatures and circus folk does not leave enough time for quality characterisation, and too many story lines vie for attention on each page. While there is no doubt that the tale is action packed, some judicious pruning would have made for a more powerful and effective story.

The driving plot, of the disintegration of the veil which separates the ordinary, ‘real’ world from the magical world of the ‘hidden’, and the battle between two brothers, one fighting to bring down the veil, the other to keep it in place provides abundant action. However, this plotline seems lost amidst the competing subplots which appear almost randomly throughout the chapters.

Overall, this book, the first in what appears to be a continuing series, introduces many aspects of fantasy and steampunk currently popular among young readers. While the themes and plotlines would appeal to readers aged eleven and above, the complexity and length of the text would best suit confident readers. I would recommend this book for keen readers who are already familiar with the fantasy and steampunk genre, and who will not be overwhelmed by the crowded narrative. This book would be a great read-aloud, with plenty of cliff-hangers to keep listeners hooked for the next installment. The dedicated website gives a taste of the tone of the book, and provides the first two chapters as a free download.