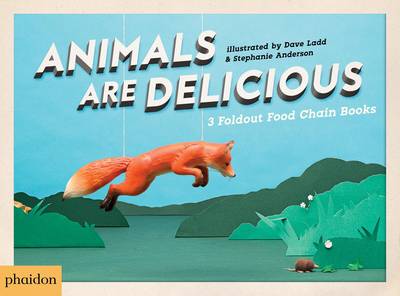 Putting aside the quibble that the word ‘everyone’ applies to people, one side of each fold-out is in full colour while the back is in black and white. The full colour illustrations are photographs of 21 diorama-style scenes featuring model animals. These have been created by an Australian husband-and-wife team who have had experience in prop-making and animation. One disappointing aspect of this style is that the wires or threads that suspend some of the creatures in mid-air are blatantly obvious. They have not been coloured to blend in with the backgrounds. (This may have been deliberate to make the fact that the animals are models more clear.)

Despite the Antipodean origins of the illustrators, the habitats and animals described are distinctly from the northern hemisphere, except for the fold-out about the oceans which focuses on creatures found in the Antarctic. The others include shrews, bobcats, weasels and skunks, to name a few.

This set may be useful in the classroom as it could be displayed easily on a shelf, table or wall. Its use in Australian schools may be less useful because of the lack of Australian content.