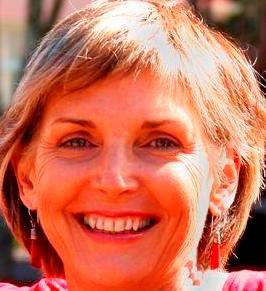 Sandi Harrold is an artist, children’s author and illustrator.  She has worked as a kindergarten teacher, director and teacher at a C&K early childhood centre, and has also taught ESL (English as a Second Language).  Sandi currently tutors children with special needs and spends every spare moment writing and painting at her home, a traditional old ‘Queenslander’ in the western suburbs of Brisbane.  She spoke to Reading Time about her career and her art…

We live in the bush and enjoy peace and tranquillity.  Our garden is filled with King Parrots and our Jack Russell terrier Jack, who is featured in some of my paintings.  I was born and raised in the Queensland bush, west of Warwick.  One of my jobs was to look after the chooks.  Maybe that’s why I paint them now.  We had Border Leicester sheep (like the ones in Babe) and later changed to Santa Gertrudis cattle.

I honestly can’t remember ever drawing or painting.  My grandma Zara painted delicate little watercolour birds.  I have fond memories of sitting in her window seat while she painted these exquisite little birds with only a few light brush strokes.  I really love birds, maybe because of their freedom.  I hate seeing anything in cages.

Emus play a big part in my paintings, something left over from my love of them as a child.  My mother owned a property west of Goondiwindi and my brother and I spent some time there with my aunt and uncle.  There were emus, wild pigs and kangaroos everywhere.  I appreciated the beauty all around me but never made the link between nature’s beauty and the word ‘art’.  There were no art galleries nearby so I never got that kind of exposure.  I trained as a kindergarten teacher at the Kindergarten Teachers College, an institution which trained kindergarten teachers exclusively, and I eventually graduated with a Dip Ed.  ECE.  I was born to be a kindergarten teacher.  I loved every moment!

I had written several children’s stories and sent some of them to various publishers.  A couple were rejected because they weren’t illustrated.  Others, of a more serious and poignant nature – about a young child with autism for example – were rejected at the time.  I was told there would be limited sales and the publishers couldn’t make a profit.  Each time it took months to receive a reply, so I just gave up.

I made enquires about having the stories illustrated, but when I discovered the cost of having someone do these for me I thought, ‘how hard can it be?’  I enrolled at an art school at Southbank to find out how to draw and learned to use coloured pencils.  It was fun but restricting because I’m not interested in realism.  I appreciate how brilliant people are in recreating lifelike art but I like being different!

So I began drawing in order to illustrate the children’s story books I’d written.  I decided I would illustrate my Three Little Owls story, which ended up being my first book.  The next day I sent the story away to be self-published – I was too impatient to wait two or three months, let alone years, to see if a publisher would accept it.  I’ve sold over 400 copies of that book and received many great comments, especially from speech therapists, who use it as a resource book.

Since then I’ve written and illustrated several more books.  Jack’s Busy Week tells the tale of a helpful little dog who saves or helps everyone on the farm.  Tom is a real story.  Every week Tom was dragged along to his big sister’s dance classes and was totally bored, until one day he slipped on his sister’s tap shoes and the ‘la bamba’ music started to play.  I edited and illustrated Under the Rose Bush by Jane Fry.  This is the story of a young girl who adores her Grandma but has to learn to adjust as her Granny ages.  The story provides a sense of optimism, despite the child’s grief when she eventually loses her beloved grandmother.

Sarah and Andy, also published by Green Olive Press, was donated to Aussie Angels Assistance Dogs, a wonderful charity in Tasmania.  The dogs are trained to ‘smell’ the chemical changes when a child is about to have a seizure and bark in a particular way to alert the parents.  The story helps the young child realise the need to care for and love the animal as much as the dog loves and cares for them.  Recently, I illustrated and co-wrote a series of five books with Uncle Joe Kirk, an Aboriginal Brisbane and Wakka Wakka Elder, to whom I was introduced by another early childhood teacher.  These books have been accepted by Scholastic Australia, with the first book Karana being released in May 2014.

I had 500 printed of Three Little Owls, Jack’s Busy Week, and Tom and have only a few copies of each left.  I’m hoping that a publisher may discover them and offer a reprint.  I’d redo many of the illustrations as I think I could do a better job now.  I recently enjoyed illustrating a book cover for a futuristic fiction book for teenagers, which will be available soon on Amazon.

Even though I began drawing in order to illustrate children’s story books, I was beginning to feel that it was all too slow and I’d die of old age before I finished!  That was when I took up acrylics and I haven’t stopped since.  I think I’ll stick with acrylics.  They’re fast and I can redo or completely paint over something once the painting is dry – or I can hose it off and start again!  If I ever find that I’m not pressed for time I will definitely return to coloured pencils, pen and ink.  These are good for some illustrations too.  I paint dainty things for my mother.  She doesn’t get my other style of art.  She tries very hard to be polite, but not hard enough to fool me!

I’ve honestly lost count of the number of paintings I’ve done, even though I only started painting in late 2007.  It was around 400 two years ago and I’ve sold most of my paintings.  I don’t keep the ones I’m not totally happy with.  I either paint over them or have a Christmas bonfire with any that are left at the end of the year!  I have received quite a lot of commissions.  I was a little nervous at first, but the people who ask me to do things for them know my style and that’s what they want.  Weird and interesting thoughts pop into my head and I paint them onto canvas.  Sheep, cows – anything.  I’m trying meerkats at the moment.  Not going well so far.  Might be heading for a hosing off, maybe?

I’m often referred to as ‘The Chook Lady’ or ‘The Emu Lady’ – I answer to both!  The biggest painting I have done was almost 2 metres x 70cm and it was a commission for chooks!  I nearly freaked out when I saw the size of the canvas.  I walked around for a day or two thinking ‘what have I done?’  Once I started though, I loved doing it, and the purchaser was very happy.  I’ve had commissions to paint ‘family’ portraits, depicting owls and chooks etcetera as the different members of a family.  Sometimes people find me online or see me at markets and some people see my art at the EKKA (Brisbane’s Royal Agricultural Show) or at the Brookfield Show and contact me with requests.

I have been successful in selling my paintings at the Rotary Art Spectacular shows held in April each year and also at The Ekka, the Brookfield Show and Art with Benefits.  I keep my prices realistic as my art appeals to young families, and adults with a whacky sense of humour!  The more I sell – the more I paint!  I donate to charities quite often too.  I love to help people and it makes me feel good to share a part of me with others by offering a painting.

In 2013 I had some great successes, including selling all six of my works on opening night at the Rochester Annual 6×6 Exhibition in New York.  I also very much enjoyed holding three successful art shows with Kylie Farrelly, another Brisbane artist.  We set these shows up ourselves and we’ll do more together as Kylie and I are a great contrast; she paints Brisbane scenes and I do animals and so forth.  Both of us use masses of colour!