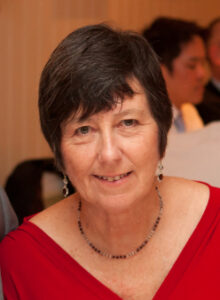 Jane Fry, author of new picture book, Under The Rose Bush, which deals with the difficult topic of Alzheimer’s, dropped in to Reading Time to tell us about her writing process…

I have heard it said that writing gives you the chance to sort out the fragments of your life and piece them together.  Writing Under The Rose Bush has had great significance for me and has certainly been the case here.  Telling you the background to the writing of the picture book, before discussing the writing process, certainly seems a good place to start.

When my mother got Alzheimer’s disease I really had absolutely no idea about it.  The whole area of this mental health issue was alien, and the impact it had on the family, was quite frightening.  The change we observed, as a family, had an impact on us all, especially as my children were 13, 10, and 7 at the time.  Their grandmother fluctuated from being the best, calm, loving Granny, to someone who at times they barely knew or recognized, and they struggled to understand what was going on.  One of her nurses told me Alzheimer’s disease is like a loose battery: some times there is a connection, and other times nothing.  The unpredictability is wearing.

Having sought help, and talked to a variety of people, some undergoing the same, or a similar problem, it seemed that writing a book would help other children to discuss the ageing process.  Often a book can be less confronting, but can encourage a discussion from the child’s perspective.  It would have been a great help for my children and me at the time, to have had access to something like this.

There are lots of other issues now facing kids and reading about them in a book can often be more relevant, and less confronting for kids to handle.  Right now I am working on a book, which deals with a boy who lives between two houses because his parents have separated.  A friend of mine who is a primary teacher said there is a great need for this in her classroom as it is a major problem.

So why write?  I guess from my point of view it allowed me to get that part of my life in perspective.  After my mother died, I often thought about her, and various episodes, and fragments of her life; some were actually quite funny, and others quite sad, and confronting, but combining those with positive memories of my mother was quite therapeutic.  The experience itself was also very memorable, and I didn’t want to forget it myself.  Writing is an interesting process, and I think one of the best ways of improving writing is to read a lot.  This familiarizes you with what you like, and styles you find most enjoyable, issues that concern you, and which characters come to life.

Basing a story on real life is a good start.  Some people have stories already inside they want to tell, while other writers spend a lot of time observing people or researching for their story.  Sitting in a coffee shop I often see people who could make a great character in a novel.  I try to imagine a story around them.  The ideas are limitless.  I try to have a notebook with me so that if I think of something I can write it down.  Writing about a real event makes the writing process easier and more realistic.  You are writing about things, which matter to you, and about your own experience.

I wrote Under The Rose Bush some time before it was published, and the major reason for this was that I hit a brick wall.  I couldn’t illustrate it.  This created a problem, as illustrations are vital to the overall impact of the story.  I spent sometime asking around trying to find an interested person but with no luck.  One day while at one of our local markets, I saw an artist whose work I had seen before.  Being a lover of pigs and chooks, I was drawn to her paintings, full of life and fun.  Tentatively I approached her and asked her if she illustrated books.  She agreed to look at the story though sounded doubtful.  A few days later she sent and email saying she loved the story.  This was Sandi Harrold and this is how Under The Rose Bush was born.

Having an idea for a story is the start, but the process of editing is often quite a long-winded journey.  Working together with someone else, also requires a lot of effort.  Being prepared to take suggestions, be as flexible as possible, and avoid going in with a definite idea that the story has to be illustrated in a certain way is all part and parcel of the process.  I guess also never giving up, is the key to publishing, keep trying till you succeed.  If I had given up earlier, my story would have remained under the rose bush and never with a publisher.