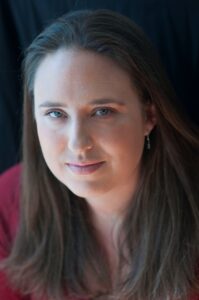 Amie Kaufman shares the beginnings of her fascination with Science Fiction, and what it’s like to co-author novels.

When I was eleven, I got a copy of Jules Verne’s 20,000 Leagues Under The Sea for Christmas.  Nobody saw me until December 27th, and when at last I emerged, I knew something important had changed.  I’d grown up reading voraciously, and I’m sure 20,000 Leagues can’t have been my first science fiction, but it had lit a spark in my brain that refused to go out.  This was a story like the fantasy I loved so much… but this one took place in my own world.  This one was – one day – possible.  It could happen to me.

I’d always been a storyteller.  From telling tall tales in the playground (and then being forced to publicly confirm in grade two that the large tree at school was not the Faraway Tree, as I had told my classmates) to carefully mapping my suburb, in the footsteps of Ransome’s Swallows and Amazons.  Now, the direction of my stories took a new bent, as I started building my library of science fiction classics from second-hand bookshops.  (It did not escape me that almost every single author of the classics was male.)

It was in secondary school that I took my love of stories online.  One day I put the name of an author I admired – Anne McCaffrey, a female science fiction writer with a long list of ‘firsts’ to her name – into a search engine.  Within minutes I was in an interactive storytelling community, built by others who loved her work, and wanted to tell stories in her world.  These days, we’d say I was writing collaborative fanfiction.  At the time, I didn’t have a name for it, but I knew I loved it.

It was there that I met Meagan Spooner, who would become my co-author on These Broken Stars.  Meg and I clicked from our first conversation – which we spent planning a hate-to-love story for a couple of characters, a portent of things to come.  In time we moved on to our own original stories and worlds, but we’ve never stopped taking star-crossed couples who loathe each other, then letting them slowly (and unwillingly) fall in love.  On reflection, all those readings and re-readings of Pride and Prejudice probably had an influence, too.

Inspiration comes from so many places – when it came to These Broken Stars, a longstanding love of shipwreck stories met a longstanding fascination with space, to create a question: what would it be like, to be shipwrecked in space?  And then, of course: who could we strand together who’d loathe each other on sight?  Once we had our setting and our characters, the story grew organically.  Indeed, to start off, we were only writing it for fun, and to entertain each other – it was late in the story’s life when we began to wonder if others might want to read it.

Meg and I were flatmates when we first started writing books together, which meant my poor husband put up with a lot of paper spread around the living room, and many gory discussions over dinner.  These days, Meg lives in the United States, and I’m in Melbourne.  We’re often asked how we work together.  The answer is that, like the science fiction writers we are, we use technology.

What else, for two girls who met online?

We spend a chunk of each day on instant messenger, chatting about the sections we’re working on, or simply what we’ve been up to.  After all, we’re friends before anything else.  We use text messages when the other one’s out and about and we need a quick answer, we jump on the phone to talk revisions when we’re out for a walk, and we video chat when we need to brainstorm for a long period.  The advantage of the time zone difference is that somebody’s always awake to deal with any publisher requests, no matter what country they’re in – and of course, when I wake up in the morning, Meg’s been working on the book throughout her day.  It’s a little like having our own personal shoemaker’s elf!

For me, the great joy of co-authoring is that you’re never on your own.  If you’re stuck, or trying to choose from between two approaches, there’s somebody there beside you who knows the story as intimately as you.  When you’re bouncing around ideas, you have a writing partner to challenge you to keep thinking, and take a concept to the next level.  I love it so much, in fact, that I’m co-authoring a second series.  Illuminae, book one in that trilogy (written with Australian author Jay Kristoff) will be out in 2015.

It’s a long way from hiding out with Jules Verne to the spaceships I unleash on my own readers today, but it’s been more fun than I knew I could have.  I’ve now been writing full time for a year, and I still sometimes look up guiltily, thinking ‘I’ve got to get some work done, I’ve been having fun all day’.  Then I remember that my fun – my writing – is exactly what I’m supposed to be doing.  In more ways than one.