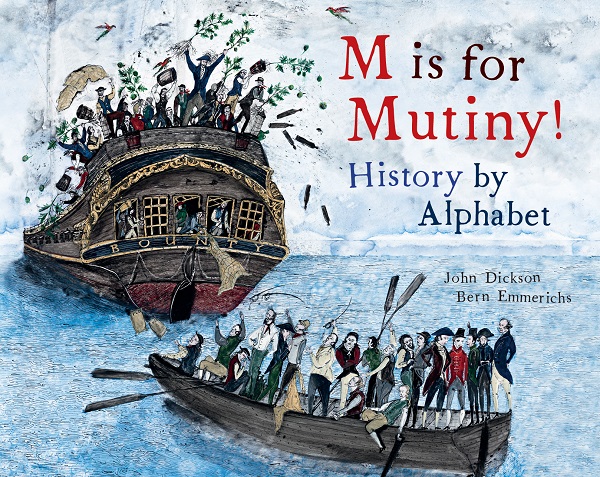 This book is receiving quite a bit of positive publicity in the run-up to Christmas, having been listed in the independent booksellers’ summer reading guide. It is a picture book for a wide age range explaining many aspects of Australia’s colonial history. Entries for each letter of the alphabet may be a person, an animal, a place, an event or a concept such as ‘O is for opportunity’ and ‘A is for Acknowledgement of country’.

Bern Emmerichs, a celebrated artist, has created large hand-painted porcelain tiles which have then been photographed. Some have also been overlaid with the text from the author. The overall effect is different and unusual but visually engaging.

The book highlights a number of fascinating aspects of Australian history, such as, on the ‘C is for Cook’ page, the text states that Captain James Cook was ‘cooked and eaten by annoyed locals’. Although the assertion he was eaten is hotly debated, after he was killed by Hawaiian warriors, Cook’s body was accorded the same funerary rites as the local chiefs – his body was cremated to remove the flesh and his bones returned to the crew on his ship. He was then buried at sea.

Unfortunately, the book contains a couple of factual errors. On the ‘G is for Government House’ page, the text states that the original building ‘on the Domain near Sydney’s Parramatta River was constructed by Captain Arthur Philip from timber and canvas ’ . This contains two errors: the Domain is not near the Parramatta River and, according to the Australian Government Department of the Environment and Energy, the first Government House was built of brick on what is now the site of the Museum of Sydney on the corner of Phillip and Bridge Streets, not on the Domain. The publisher assures Reading Time that these errors will be corrected in the next print run of this title.

Teachers Notes are available on the Newsouth Books webpage.